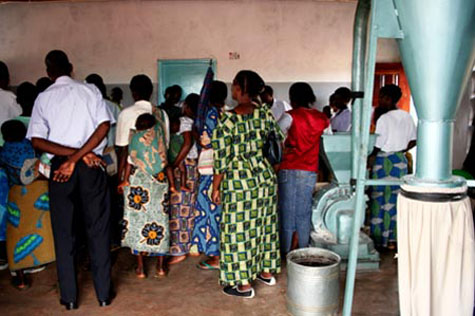 Mozambican farmers in the locality of Vila Nova da Fronteira, in Mutarara district in the western province of Tete, are obliged to cross into Malawi to mill their maize and sorghum, according to a report in Thursday’s issue of the Beira daily paper “Diario de Mocambique”.The head of the locality, Francisco Wiliam, said the problem is that there is no electricity in Vila Nova da Fronteira.

The only flour mills available are manual, and so local residents prefer to use the electric mills in Malawi, which turn their grain into flour much faster.Wiliam said that his locality lacks both electricity and water, and so some of the 18,000 or so people who live in Vila Nova da Fronteira depend on Malawi, and make the short trip across the border every day.“The women mill maize and sorghum in Malawi, because we have no electric mills here”, he said. “They also fetch water for domestic consumption because we don’t have enough pumps to supply the entire population”.“Life would be made easier if we were connected to electricity at Baue, in the Charre administrative post”, Wiliam added. “Then we wouldn’t have to go into Malawi”. Technically, crossing the border in this way is illegal, but the police take no action to stop it.

Abdul Bonomar, the deputy commander of the Frontier Guard company stationed at Vila Nova da Fronteira, said the matter was not regarded as serious. “Our work is going well”, he said. “The border violations are simple, citizens leave one country and enter the other to buy salt, or go to the hospital or to the flour mills. There’s no danger in this”. To travel to and from Malawi, Vila Nova residents are carried on bicycles. The bicycle owners say they can make 5,000 Malawian kwacha’s (about 30 US dollars) a day from this transport business.