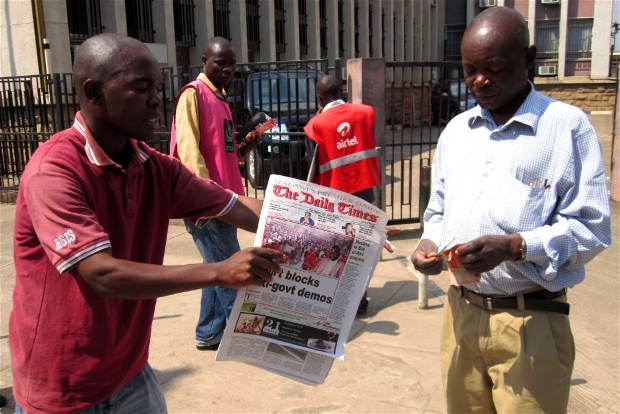 Malawi President Joyce Banda on Monday met media representatives at Sanjika Palace in the commercial capital, Blantyre where they raised several issues, including threats to journalists and ban of advertisements to some media houses by government agents.

MCM chairperson Patrick Semphere, briefing journalists after the meeting, said they commended President Joyce Banda on several issues she has addressed such as the repeal of Section 46 that empowered the Minister of Information to ban a media house and removal of value added tax (VAT) on newspapers.

But Semphere said they expressed concern about challenges the media in Malawi is still facing, citing the delay to enact the Access to Information Bill, threats to journalists seen to be critical of government, summoning of journalists by the police and the selective manner the Malawi Communications Regulatory Authority (Macra) awards frequencies, among others.

Semphere said they told the President it is their conviction that some issues will not repeat themselves such as the assault of journalists by police during last year’s July 20 anti-government demonstrations and government abuse of state broadcaster MBC.

The MCM chairperson said the President assured the delegation she will pay attention to the issues raised.

Misa Malawi Chapter chairperson Anthony Kasunda told the news conference that the other issue they raised was how presidential news conferences are organised at airports where chiefs and ruling party officials attend, arguing such an atmosphere is not friendly as the officials either clap hands or boo journalists for asking question they deem critical.

Kasunda said the President threw the ball back to the media, advising them to propose how they want the conferences conducted.

Blantyre Newspapers Limited (BNL) general manager Dr. Tikhala Chibwana, who was part of the delegation, said they had tried in vain for 18 months to secure an appointment with former president the late Bingu wa Mutharika to raise some of the concerns.

Chibwana said Banda admitted any vibrant democracy requires a free media. He said this was an impressive statement from a leader.

Al Osman of Capital Radio, who was also part of the delegation, said an appeal was made to the President to consider reducing tax of radio equipment, just like Banda’s administration has done to remove VAT on newspapers.

The delegation also told the President that there are issues that sometimes involve journalists but can easily be resolved by the media bodies, Misa Malawi and MCM. This was in reference to occasions journalists come into conflict with the authorities.

On her part, Zoe said she was grateful for the opportunity the President gave to the media, saying she was convinced government would look in the issues raised including the long outstanding Access to Information Bill.