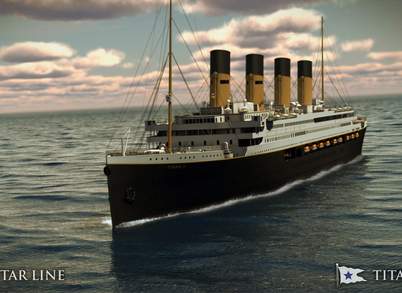 An Australian billionaire unveils his plan to build a replica of the ill-fated luxury liner that sank more than 100 years ago.

Titanic II will be a “ship of peace” and a “financial bonanza”, the Australian billionaire behind an audacious project to build a replica of the famous cruise liner has said.

Mining tycoon Clive Palmer unveiled his plans for building a nearly identical version of the long foundered vessel at the Intrepid Sea, Air and Space Museum in New York City.

“Titanic was the ship of dreams, Titanic II is the ship where dreams come true,” he said at the launch.

The chairman of the Blue Star Line said more than 40,000 people had already registered for tickets to take part in Titanic II’s maiden voyage, which will follow the same route the RMS Titanic was travelling when it sank 375 miles (600km) south of Newfoundland in April 1912.

“Originally we thought it was a good idea,” Mr Palmer told Sky News.

“We thought it would have a lot of appeal. We didn’t know how much appeal, but certainly we’ve found it’s had enormous appeal. And financially very strong as well … it’s going to be a blockbuster.”

Mr Palmer, who is funding the project entirely on his own, declined to divulge even estimated costs associated with the massive undertaking, saying it “is not about money”.

He assured Sky News he would see the endeavour through regardless of how high the price tag might go.

“If there’s any money to be lost, it should be mine,” he said.

Blue Star Line has agreed to a deal in principle with China’s state-owned CSC Jinling Shipyard to build the Titanic replica.

Although the final contracts have yet to be signed, Mr Palmer said he was certain a deal would be sealed within days.

Mr Palmer said the deal emerged during talks with the ship builder to construct four new vessels for his mining operations in Australia. He said the company has a strong desire to tap into the luxury market.

A representative from Jinling Shipyard was not present at the news conference.

Both the exterior and interior of the ship will be nearly identical to its ancestor.

A few modern modifications have been added for comfort and entertainment, including a 400-seat theatre and a casino.

The vessel will be fully air-conditioned – a luxury not even the wealthiest of RMS Titanic’s passengers could have imagined in 1912.

For those who prefer to experience the less extravagant side of Titanic, the new ship will have third class accommodations, complete with shared bathrooms, dancing to Irish drums and Irish stew on the menu.

“That’ll be where the most fun will be,” he said. “For me that’s the great adventure. I can sit down there, have some Irish stew, talk to somebody and at night I can get up and do the Irish jig. It’ll be a great place to be.”

Mr Palmer said plans are in the works to provide costumes from the era of Titanic for every passenger based on what class of ticket they hold.

He said passengers will have the option to buy tickets that allow them to experience first, second and third class.

While there is a concerted effort to recapture history, Titanic II will be designed to meet present day safety guidelines, helping ensure passengers do not suffer the same fate as their predecessors.

The new vessel will be equipped with 18 modern lifeboats, capable of holding more than the ship’s capacity of 2,435 passengers and 900 crew.

Markku Kanerva, the director of sales for Finland-based marine design company Deltamarine, which is overseeing the project, told reporters Titanic II would be “the most safe cruise ship when it is launched”, a comment that drew laughter for its historically significant jab at fate.

But when pressed further about the vessel’s improved safety features, Mr Palmer would not go as far as the original ship’s builders, declining to say his version of Titanic would be “unsinkable”.

Mr Palmer said he is aiming to have Titanic II finished by the latter half of 2016. Upon its completion, the ship will be sailed to England, where it will board passengers and make its six-day maiden voyage across the north Atlantic to New York City.

“You can imagine it sailing into New York Harbour,” Mr Palmer said.

“It’ll be fantastic because we’ll be completing the journey, which is really symbolic for all the people that came to America and passed the Statue of Liberty in the last century … The Titanic story is very much a monument to them as well.”