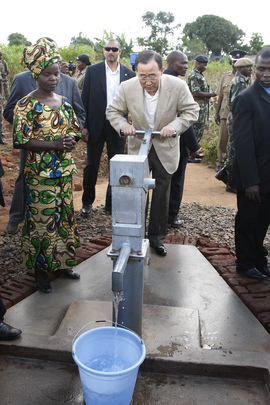 This follows the country’s failure to retain well trained and experienced health personnel in the country’s rural and hard to reach communities.

While the government of Malawi has stood by its promise of improving health care services by starting programmes aimed at reducing maternal mortality and promoting the health seeking behaviour of its people, Malawi still faces acute shortages of health personnel in hard to reach communities.

According to current statics, the patient to doctor ratio in Malawi’s remote communities remains at 100,000 to 2 which according to the international medical humanitarian organisation Medicines sans Frontiers is one of the biggest obstacles to the country’s attainment to the millennium development goals on health.

Ministry of Health Spokes Person, Henry Chimbali says that while there are many challenges that Malawi faces to bring quality services to its rural populations, the country has tried to make quality health services accessible to all.

Chimbali says one of the current administrations goals is to reduce the maternal mortality rate to 115 per 100,000 live births by 2015.

He however said there is still Human Resource for Health shortfalls in rural parts of the country an opinion he shares with Rodd Gerstenhaber Head of Mission for Medicines Sans Frontiers operational office Brussels.

“It is impossible to note that human resources for health is one of the challenges that Malawi is facing to reach the goal to universal access of health services, “says Gerstenhaber adding, “MSF has on its part been supporting the government of Malawi with incentives to improve the livelihoods of health service workers in three southern Malawian districts of Thyolo, Chichewa and Nsanje so that they can remain in the hard to reach areas”.

To get a clear picture on the health delivery system in hard to reach parts of rural Malawi Africa news visited three hard to reach districts of Nsanje, Chikhwawa and Neno where it was discovered that patients are still travelling long distances to reach the nearest health facility.

Melania Mukongwa, community nurse and midwife at Sankulani Health Centre in Nsanje said in an interview that patients including pregnant women were travelling long distances to reach the health facility a development she said was forcing some of them to resort to traditional remedies.

“People in our catchment area now understand the importance of attending to the health center for medical consultations including neonatal clinics for pregnant women however the long distances these patients travel to reach a health establishment makes it difficult for them to access the service, “she said.

Khwatcha Kabwera Banda a Medical Assistant at Gaga Health Centre in Chikhwawa believes that the medical profession is a calling that has to be followed by people who wish to serve the poor desperate populations, however he said rural populations are yet to access quality services in following the human resource shortfalls in the health service sector.

He however said health care workers in rural areas serve large populations compromising the health service delivery in the process.

“This health facility for instance serves a population of over 50,000 people and this population added to the population coming from the other facilities that have stopped working following staff shortages gives us more work load, “he bemoaned.

While MSF has been targeting the health service worker, Partners in Health (PIH), an international humanitarian health orgnisation working in the southern Malawian district of Neno believes that local communities can also play an important role in promoting health care.

PIH has trained over 6000 Village health workers who according to Samson Njolomole External Relations manager at the orgnisation has improved health care services in the hard to reach parts of the district.

However Njolomole says the orgnisation fails to deliver quality health services to all in the district due to the bad road network.

Njolomole however said the government of Malawi has with support from its development partners tried to reach its goals to health aside the several challenges that has to be addressed.

District Health Officer for Chikhwawa Dr. Elizabeth Nkosi believes that Malawi will be proud of having reached the universal goal to health services when each health facility has at least two Medical Assistants and two Nurses.

“The challenge that we currently have in the country is that health workers attend to many patients as a result of the gaps in the staffing levels, “she said.

According to Dr. Nkosi the HRH situation in Malawian remote districts like Chikhwawa is pathetic adding that it is not a problem that can be solved by government alone.

However Nkosi says there is need to instill a humanitarian spirit the youthful medical practitioners if they have to be attracted to work in the rural areas.

Amanda Banda Advocacy Officer at MSF-B said her orgnisation stands for equal access to health care and has been offering medical scholarships to young medical students from the hard to reach parts of three southern Malawian districts of Chikhwawa, Nsanje and Thyolo.

“We have been working on disaster and have made an impact in the lives of people that were affected by floods in Kalonga, the lower Shire and just recently in Mangochi and Phalombe, however we thought it worthwhile to train medical workers after noticing the challenges the communities we work with were facing to get healthy services,” she said.

She said MSF has invested 84 Million for the training of health care workers that are to serving in the remote hard to reach parts of the three districts.