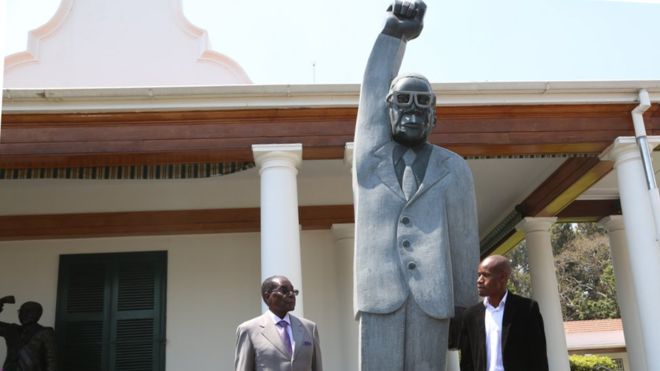 A famous Zimbabwean sculptor has insisted his statue of Robert Mugabe was not intended to mock the president.

It was widely criticised on social media after it was unveiled at his official residence State House on Friday.

Dominic Benhura told the state-run Herald newspaper that “honestly, no-one would abuse such an opportunity”.

Mr Mugabe, who has been in power since 1980, has vowed to crack down on protests against his rule.

Tweeters questioned the sculptors motives, with some suggesting it was a reaction to being forced to make the statue. The sculptor Mr Benhura, who has exhibited his work across the world, denied he was making fun of the president and said that people don’t understand his art.

“That sculpture was never meant to look exactly as the president’s image. I do not do exact figures.”

“This is the style I have mastered. My collectors can identify my pieces when they see them anywhere in the world because I chose to be different and that is my signature.”

He was quoted in the Herald as saying that he was so grateful that the statue stimulated “a kind of wonder, a kind of love, a kind of appreciation and satisfaction”.