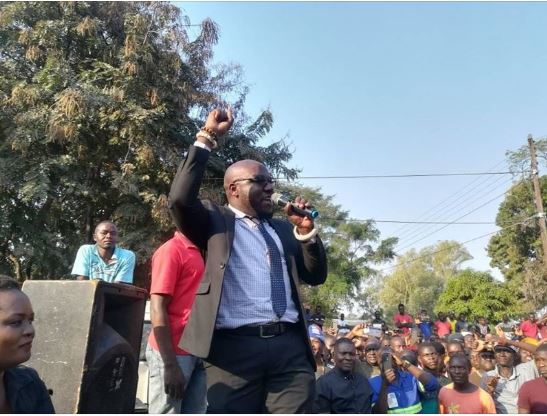 The Organizers of Anti-Ansah demonstrations Human Rights Defenders Coalition (HRDC) have said they will not relent from fighting for Malawians until justice is prevailed.

The remarks were said on August 24 in Karonga during the first ever citizen rally the coalition organized in a quest to sensitize citizens on the importance of taking part in peaceful demonstrations.

In his remarks Gift Trapence HRDC vice chairperson said the organization will no bow to any form of intimidation by the ruling Democratic Progressive Party (DPP).

“HRDC will not accept that the hard fought democracy is trumped on by the DPP leadership,” Trapence said.

Trapence continued by saying that there is too much nepotism in the country and must stop.

He further sent a warning to those that are associating HRDC with any political party to stop making the allegations saying HRDC is an independent organization not a political party.

Commenting on the injuction place by Malawi Revenue Authority (MRA) Trapence said they are engaging their lawyers to deal with the injunction on the planned demonstrations.

HRDC chairperson Timothy Mtambp took the floor speaking in Lambya to the excitement of the crowd proving wrong those that describes him of being a foreigner.

Mtambo that HRDC is for the people, it’s “people power” and not about politics.

“They will come for us, but we will not go back. The people who fought for our freedom wanted us to be free, that we should have power in whatever that is happening. It’s a point of no return.” Mtambo said.

An emotional Mtambo talks about how people wanted to petrol bomb his father’s house in Chitipa. He calls it barbaric, and warns that those involved will face justice one day.

Mtambo warns that those involved in attacking others with petrol bombs will regret soon, as Malawians are losing patience

The rally ended with a warning from Mtambo that the next time thugs petrol bomb anybody, people will be in the streets until their cries are heard.

HRDC has been organizing demonstrations calling for a resignation of Malawi Electoral Commission (MEC) chairperson Jane Ansah for failing to manage May 21 disputed elections.