A little boy is recovering after having 526 teeth removed from his mouth.

The boy, 7, was admitted to private hospital Saveetha Dental College in Chennai, southern India, with huge swelling in his jaw.

His anxious parents Parghu, 40, and Rajakumari, 33, initially feared their son might have cancer.

To their relief – and surprise – schoolboy Ravindran had instead developed a growth that contained hundreds of tiny teeth.

Medics, who have released pictures of the discovery – said they were stunned after performing a CT Scan and X-ray and finding the five inch mass of teeth.

Surgeon’s removed the ‘sac’ and teeth in a five-hour meticulous operation.

Pathologists at the hospital called the sac ‘reminiscent of pearls in an oyster’.

The child had been suffering for the last four years from the growth but had never been diagnosed, despite seeing doctors.

Professor P Senthilnathan, Department of Oral and Maxillofacial Surgery at the hospital, said: ‘The parents first noticed the swelling when the boy was three years old.

‘But they didn’t bother much as the swelling wasn’t much then and the boy did not cooperate with investigative procedures either.

‘Later as swelling increased, the parents brought the boy to our hospital.

‘We opened up the jaw after administering general anaesthesia and saw a bag/sack inside it.

‘The sack, weighing about 200 grams, was carefully removed and was later found to contain 526 teeth – small, medium and large.’

Though some teeth were very tiny particles, they had the properties of teeth, doctors said. 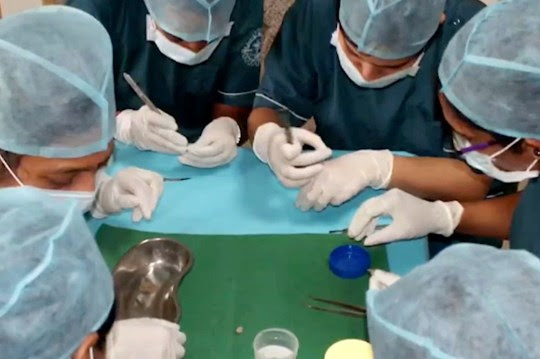 Ravindran was in severe pain when he was admitted to hospital (Picture: Caters) 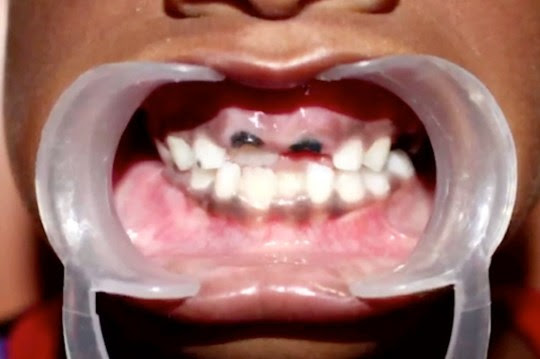 According to the doctors, this is the first ever case documented in the world in which in an individual has been found to have so many minute teeth.

The boy’s father, Parghu, said: ‘The size of the lump was 5cm and weighed over 100 grams. I thought he had cancer.

‘Doctors at Saveetha told me they could only tell after investigation.

‘At the age of three I took him to hospital but he did not get any proper treatment and counselling, since he was so small, so we left it at that.

‘I am very happy now that my child is fine. I am relieved. He is eating happily and leading a normal life.’