A video went viral few days ago showing a Texas-based pastor, Pastor Wilson sucking a lady’s honeypot who is not his wife.The lady who has been identified as Corinthia Edwards.

In the video, Pastor David Wilson of the BibleWay Ministries & World Out Reach, Inc., Texas, was clearly engrossed the act that he seems not aware he was being recorded.

The clip, accompanied by the caption “Pastor Wilson out here doing the lords work,” was originally shared on Twitter and has now gone viral across various social media platforms.
The alleged Pastor Wilson tape has been viral and has got Nigerians talking.

Now it appears the detectives on social media have done their job as always and the woman in the viral video has been identified.

According to a Twitter user, the woman in the viral video is Corinthia Edwards.

Another person claims she “exposed” him on Facebook, but it’s not clear why she exposed him. Wilson is reportedly married and Edwards is allegedly not his wife. 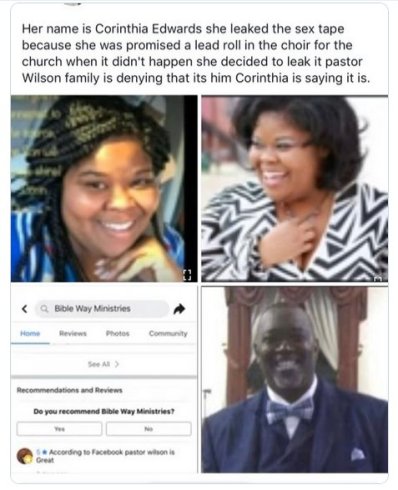