Justice Minister Sackeus Shanghala and Fisheries Minister Bernard Esau are accused of taking bribes to award horse mackerel quotas to Samherji, according to media reports in Namibia and Iceland which cite documents published by Wikileaks.

WikiLeak’s website shows that the data leakage includes thousands of documents – e-mails, internal reports, spreadsheets, presentations and photos – related to Samherji. This is the first of two batches of documents, containing information about the company. The second batch of documents will be released in two to three weeks.

President Hage Geingob accepted their resignations following a meeting and noted that according to Namibian law, they remained innocent until proven guilty.
Media, including The Namibian newspaper and Iceland’s RUV, reported that Shanghala, Esau and the Namibia managing director of Investec led a conspiracy which brought about bribes totaling at least 150 million Namibian dollars ($10 million) over four years.
The Namibian newspaper further reported that the plot began five years ago and involved relatives of the ministers and officials from Angola.
An Icelandic newspaper, Studin, reported that Samherji moved more than $70 million through a shell company in the Marshall Islands between 2011 and 2018.  Some of the money went to Namibian officials.

Wikileaks said authorities in Namibia have been investigating the case for close to a year. 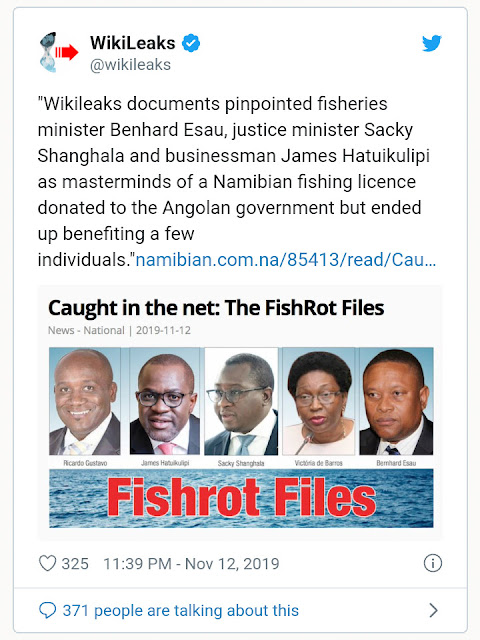 Samherji has denied allegations of wrongdoing and hired a law firm to investigate the activities in Namibia.

“In this investigation, nothing will be excluded and we will disclose its findings as soon as they become available,” the firm said.
Investec in a response on Twitter said it is investigating the matter and would collaborate with the authorities.
The scandal is a blow to President Geingob’s image and his ruling South West Africa People’s Organisation (SWAPO) party ahead of presidential elections due to be held on November 27.
Geingob is seeking a second five-year term in office.
Namibia, whose fishing and fish processing industry is second only to mining, is in the middle of one of its worst economic crisis in decades.