The corpse of kidnapped businessman, Ignatius Odunukwe was recently recovered and his body parts found inside ‘Ghana Must Go’ Face of Malawi Can Reveal.

The suspected identified as Arinze, Solomon, Cletus and Daniel Ibeaju were filmed taking turns to confirm that the body in the bag belongs to the missing businessman who they killed and dumped inside the forest in Ajah. 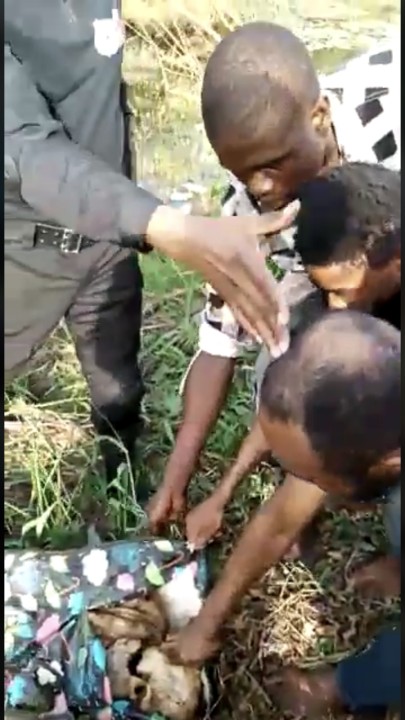 The suspects arrested in connection with Odunukwe’s death

The corpse was dumped after they had killed him, cut his body bits by bits and disposed of it in a sack bag.

The body was discovered by the residents of the vicinity, who in turn, alerted the police.

The miscreants had disguised themselves to be estate buyers in order to lure the businessman, who wanted to sell his property at Abuja for N900m.

Reports claim they killed the man after they got hold of all the original documents of the property.

After Odunukwe had disappeared for days, his cousin, whom he had confided in, raised an alarm and the criminals were apprehended at the site while trying to resale the property to another person.

. Some miscreants pretending to be estate buyers lured him because he wanted to sell his property at Abuja for N900m Probably hypnotized him, he gave them all the original documents of the property and they killed him immediately they got hold of the papers. He disappeared but because he discussed it with his cousin lawyer who he asked to make agreement for him, the lawyer raised alarm and the criminals were apprehended at the site trying to resale the property to another person. 🎥- GoldmyneTv Mother of Twins, Triplets, Welcomes Another Set of Triplets