The government will keep pushing for buyers to meet its minimum prices for tobacco, Mutharika said in a speech today at the opening of an auction in Mzuzu, in northern Malawi, broadcast on state TV. Buyers have rejected more than half of the leaves on offer since the selling season officially started on March 14, he said.

“The crop is of national importance and if you reject 70 percent of the crop, what do you want to do?” he said. “Kill the economy? Do you want to sabotage this economy?”

The average price of tobacco in Malawi, the world’s largest producer of the burley variety, fell 57 percent below the government set price of $1.80 per kilogram (2.2 pounds) in the week to March 25, the country’s central bank said April 11. Sales were 80 percent lower in the first five weeks of the season compared with a year earlier, the Daily Times reported April 20, citing the Tobacco Control Commission.

Mutharika backed down on a March 15 threat to deport buyers for offering low prices. “I will not deport you, I hope you will change,” he said.

Tobacco is Malawi’s biggest foreign-exchange earner, accounting for 60 percent of all revenue earned from abroad. Burley tobacco is a lower-grade variety of the leaf used to fill cigarettes flavored with higher-grade flue-cured tobacco.

To contact the reporter on this story: Frank Jomo in Blantyre at fjomo@bloomberg.net

To contact the editor responsible for this story: Antony Sguazzin at asguazzin@bloomberg.net 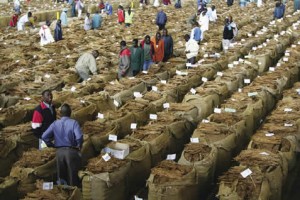