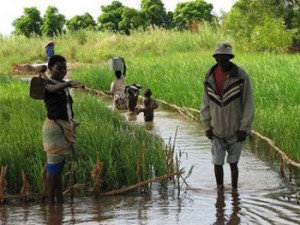 Due to its political momentum, the FIS Programme has reduced both the policy and energy of Ministry of Agriculture to FOOD SECURITY, specifically, MAIZE. Of course it is justifiable considering that 97 percent of the farmers are engaged in maize production. However, Ministry of Agriculture has a broader role than just food security. The tobacco, sugar, tea, cotton, rice, ground nuts, livestock, fisheries, horticulture development equally need a strategy for support. Otherwise, the maize bias will risk turning the country into a maize economy while losing on the potential national and regional markets for the other commodities.

Proper assessment and surveillance of the internal, regional and international market will be a key pre-liquisite input into the Comprehensive Plan.

Key to this Comprehensive Plan will be nurturing development and growth of small, medium and large entreprenuers in the commodity value chain with financing terms that accommodate for entrepreneurial learning and long-term private investments in irrigation.

The government will have to invest in few but clearly identified and beneficial research while exploiting research opportunities availed by the CGIARs and other regional commodty-specific research orgaizations. The identification of government funded research priorities should closely engage commodity value chain actors through their institutions.

Work with the Regional Economic Integration Community (COMESA, SADC) towards a unified regional agricultural policy while aligning both national and regional agricultural policy to the African Union’s Framewok of CAADP. In addition to creating trade space for regional commodties, the unified policy will also be important in strengthening leverage of the bloc in the WTO and other extra-regional trade negotiations including climate change.

[1] The SPS and TIP package comprised 10kg NPK fertilizer, 5kg Urea with 2kg hybrid maize seed or 8kg rice seed, plus 1kg each of ground nuts, beans, soya beans, and pigeon peas depending on the part of the country.