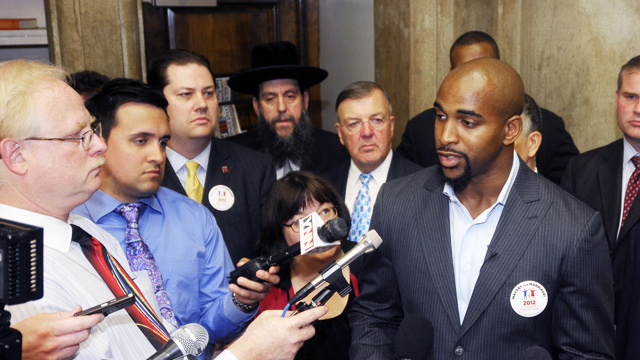 The big vote on legalizing same-sex marriage in New York could still come in the state senate today — the last scheduled day of the current legislative session — but reports are trickling in that it could be delayed until Wednesday or Thursday, during an extended session.

This means you might have several more days to hoot and holler in the Assembly in Albany, or at state Sen. Greg Ball, the potential final “yes” vote who is letting Twitter decide for him.

But really, go to the State Assembly! You can join in on the fierce dueling protests, where, among other things, football player David Tyree (pictured above) is explaining why he’d give up his Super Bowl win if it stopped the gays from getting hitched. That’s not how it works, David.