No mud, no rain, no queues – the Lake of Stars festival is a music extravaganza with a difference. Our writer gets into the party spirit on the shores of Lake Malawi

It was mid-afternoon on the western shores of Lake Malawi, and a 3,000-plus crowd of Africans and Europeans was shuffling across the sand, heads arched upwards at a blue dot floating through the sky. The Malawian minister of tourism had just thrown himself out of a plane. For five minutes the wind swung him this way and that across the bay, over the yellow mounds of bush that pin the beach, until finally he came to land on the sand with a whoosh.

He freed himself from his parachute, stripped down to a fluorescent floral shirt and battled through the crowd towards a wooden stage, where a gang of local carpenters was still banging in buffer planks over huge bass speakers flown in from the UK the night before. “Malawi does not want to be known as the place where Madonna adopts babies,” he said. “This is a country with swagger. I hereby issue a ministerial directive ordering everyone to enjoy themselves!”

Five thousand miles from the throes of the British festival season, the seventh Lake of Stars festival had begun. In the crowd were hundreds of Brits who had made the 20-hour journey from the UK – via Heathrow, Nairobi and a four-hour bus journey from the capital, Lilongwe, and parched plateaus. Expectations of mud, motorways and cider dissolved. In their place: lilting palm trees, 50- mile views across Lake Malawi to the shores of Mozambique, and 35C heat.

“He’s right,” said Will Jameson, the founder of the Lake of Stars festival. “All you hear about Malawi is famine and sadness. No one seems to realise how much fun and happiness there is.”

Jameson first visited the country as a worker for the Wildlife Society on his gap year in 1998. He returned to Liverpool John Moores University with an empty carton of the Malawian beer Chibuku Shake Shake and started a club night named in its honour, which was voted the UK’s best by Mixmag in 2004. With the experience and contacts he garnered through the club, Jameson threw the first Lake of Stars festival later that year and managed to attract 700 people (120 of whom were from the UK) to the northwestern shores of the lake at Chintheche.

Jameson knew that a festival in Malawi couldn’t operate on the British model, so he tore up the rule book. “Most of the staff are volunteers, and barely any of the acts get paid. We’ve got local musicians playing together with international stars, and budding sound technicians from local villages shadowing everything that happens on stage. It’s different. Some festivals airlift into an area and then leave. We don’t want that. We bring more than $1m into the area and, eventually, we hope to hand the whole thing over to the Malawians.” 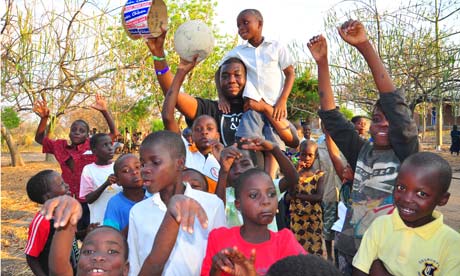 Artist Afrikan Boy on a visit to a local orphanage. Photograph: Sam Colman

Sleepwalking through arrivals at Lilongwe airport a few days before the festival began, I had the first indication of just what this event means for the country. At the money exchange a clerk spotted my backpack and asked if I was bound for the festival on the lake. “Oooh,” he squealed, “you’re gonna have a great time, my friend! A great time!” He started dancing in the booth, bumping his bottom against a female colleague, who swatted him away with a wad of dollars.

The minibus rattled away from the airport and on to dust-track roads that cut through sporadic villages where men huddled for shade under trees and bushes as women ferried sack s of grain balanced on their heads between houses of mudbrick and straw. In the bigger villages there were clusters of corrugated shops with peeling advertising slogans scraped into powdery stucco. We stopped at a police checkpoint and scores of children ran up to the minibus hawking cauliflowers, onions and corn. Fresh from the airport there was an immediate, inescapable sense of hardship. Malawi is the 13th poorest country in the world, with an average yearly income of around $170 per person, the fewest doctors per person on the planet, and up to one million people infected with HIV.

Over the past two decades tourism has gently taken root on Lake Malawi, from the backpacker haunts around Cape Maclear in the north to the high-standard $100-a-night lodges around Mangochi. As fish stocks in the lake diminish each year, the tourism industry – and the local employment and service provision it brings in through improved roads, better hospitals and clean water – is vital. Ten years ago, if a local family made some decent money they would up sticks to the cities. These days they stay around.

After the minister of tourism’s flamboyant opening announcement, the music started up. The majority of the crowd was Malawian, with a sprinkling of Africans from neighbouring countries, and several hundred Brits. The first night’s headliner was Zimbabwean Oliver “Tuku” Mtukudzi. I’m sure I wasn’t alone in not having a clue who he was. And I’m sure I wasn’t alone in thinking he was the highlight of the entire festival. The joyous, rolling, jerky guitar; the ever-pounding marimba, and Mtukudzi’s gritty, soulful vocals. And boy, can he dance, swaying across the stage like a human slinky. The crowd mimicked, hopping on the sand and throwing their bodies in extravagant loops and twists. Other acts on the bill included the UK’s Noisettes, Get Cape. Wear Cape. Fly, and Radio 1’s MistaJam. 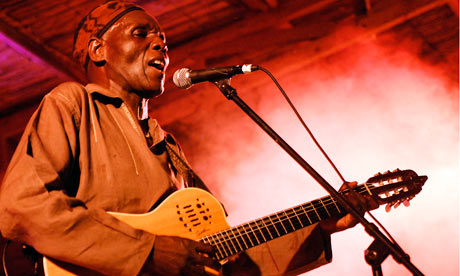 The rhythm of the festival had been set and for three nights throngs of dancers partied until dawn, racing between three stages under a sky peppered with stars and mirrored by the bobbing lights of fishing boats on the lake. Jameson’s intention in setting up the festival seven years ago was to bring some much-needed attention to the indisputably positive aspects of this country – the music, the natural beauty and the people – and it seems to be working. But as the festival evolves, its outreach into the community is also growing.

During the day, the festival organises trips to associated local projects. An hour away from the site, on the outskirts of Magochi, I visited a village where the Microloan Foundation, the festival’s nominated charity, has been working with a group of local women for years. The scheme, inspired by the microcredit system pioneered by Bangladeshi economist Muhammad Yunus, gives small loans of around $60 to local women – who are more trusted, and versed in family economics, than the men. Many here believe that decades of foreign aid have created an entitlement culture in Africa which needs to be replaced with solid financial management. The scheme is now 80% self-sustaining in the country, and is supporting more than 25,000 women and their businesses – from drying fish to setting up shops.

On the final afternoon a troupe of festival-goers walked to the Mangochi orphanage (fomoe.org) on an organised visit and played football and music with hundreds of local children. In many ways these visits are an odd companion to the joyous outpourings of the festival. But there seems little point in corralling hundreds of rich Europeans to one of the poorest corners of the world without at least nudging them towards doing something. While the Lake of Stars pumps money into the local economy, and does as much as it can to support local initiatives, its biggest impact perhaps is collateral. On the outskirts of the festival Ben Paget, a Manchester-based promoter, was laying the first bricks of a nursery he had decided to fund since arriving at the festival as a volunteer two weeks earlier. Aside from the music, the festival seems to create a huge amount of goodwill. The question is what happens next.

For the Lake of Stars, the intention is merely to continue. And perhaps to become a model. Among the 3,300 people who attended the festival were two brothers from Ghana and a British expat from Kenya hoping to imitate the festival in their countries. Jameson and fellow director Tom Porter recently visited Rwanda to explore the idea of a festival there – it bodes well that he ended up dancing until three in the morning to a Congolese soukous band in Kigali.

During my three days on the lake, the minister of tourism’s words were ringing in my ears. The Lake of Stars isn’t going to “cure” Malawi of its problems. But it certainly can provide a showcase for one of its biggest success stories – the ability, in spite of it all, to swagger.

The Lake of Stars Festival runs from 30 September to 2 October at Sunbird Nkopola Lodge, Mangochi, Malawi (lakeofstars.org). Accommodation and travel packages, starting from £939, can be arranged through Venture Co (ventureco-worldwide.com). Kenya Airways flies daily from London Heathrow to Nairobi with daily connections to Lilongwe, Malawi (020-8283 1818, kenya-airways.com). Return fares start
at £635

Previous articleTax relief for NGOs is scrapped by Malawi gov. A way to limit NGO activity?
Next articleCHART: Things That Annoy Me About NGOs Working In Malawi