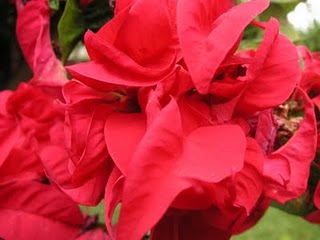 I was wondering, when I arrived at our house in Lilongwe, why a bush had been cut back to a stump. In that way of things where assumption rides to the rescue my thought was:’Why do they chop everything down in Africa?’

Now, to be fair to me, the African way of things is to chop away at bushes and trees in order to take the wood for making charcoal which can then be sold. It is sadly common to see stumps lining the roadside of trees and bushes which would once have been glorious.

I did ask Fred the gardener why it had been cut back and he said because it would grow. I did not believe him.I looked at my stump last November and thought the worst.

Now, here I am in June having to ‘eat my words’ or re-process my thoughts because the ‘stump’ has shot out graceful fronds which, because there were two stumps separated by a couple of feet (never did get to metrics apart from baking), now form a glorious, crimson blossomed arch. Well, what amounts to globes of crimson blossom, as seen in the photo above, balanced upon a long, langorous and looping stem as seen in the photo below.

It must be a form of bougainvillea, I thought. The same plant is commonly seen around the streets nearby. But no, wrong yet again for a search on the net reveals it to be a variety of poinsettia, that other gloriously crimson blossom which for Australia is associated with Christmas. Poinsettia blooms here in June and July, both the traditional version and this one which I had never before seen.

While I don’t have a problem with being wrong I am, on this count, absolutely delighted to be wrong. 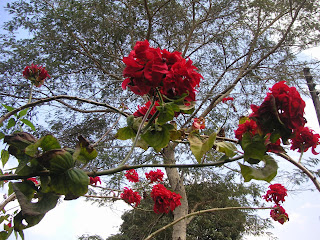 But, blossoms aside it was poison upon which I pondered last night having picked up a book to read called, The Boy Who Harnessed the Wind, by William Kamkwamba and Bryan Mealer. This book, which became a New York Times best-seller a couple of years ago, is the story of a Malawi boy who dreamt of building a small windmill which would bring his village electricity and running water.

In this land, where magic rules and science is a mystery, as the blurb on the back cover says, a young boy sought to dare the system and succeeded. I am only just into the book and his courage and determination is not what strikes me… hardly surprising given what I have seen of human nature in my lifetime and never more so in the Third World where innovation and enterprise often mean the difference between life and death … but it is how he talks of the belief in magic which rules the African mind.

Given that last time I wrote about witchcraft I was fascinated to find in this book, more tales of the terror and turmoil which such beliefs have on Malawian minds, both young and old. It is fear which rules this world, woven into dreams and fantasies and stories and superstitions. People don’t just die and bad things don’t just happen; it is always the work of witches or wizards with their spells and their poisons.

Witches and wizards never reveal their identities he says so you can never know where their traps might lie, nor what shape they will take.

‘Men with bald heads, twenty feet tall, are said to appear on the roads outside of Ntchisi, a few at first, then dozens,’ writes William in his book. ‘Ghost trucks drive the same roads at night, coming on fast with their bright lights flashing and engines revving loud, but as the lights pass by, no truck is attached and no tire marks are left on the road, and if you’re driving a car, your engine will die until morning.’

‘But the dangers for children are even greater,’ says William. ‘They tempt them with delicious meats, saying it’s the only way to heaven. Once the children devour the tasty morsels, it’;s revealed as human flesh. By then it is too late, for once the wizard’s evil is inside your body, it controls you forever.

The wizards and witches, he says, command vast armies of children whom they use to do their witchcraft and each night they prowl the villages for fresh recruits. They use witch planes which fly overhead at night and they also use magic hyenas with razor jaws and  magic lions and snakes the size of tractors.

‘The children pile aboard witch planes that prowl the skies at night, capable of travelling to Zambia and London in a single minute. Witch planes can be anything: a wooden basin, a clay pot, a simple hat. Flying about on magic duty, the children are sent to homes of rival wizards to test their powers. If the child is killed in the process, the wizard can determine the weapon of his enemy and develop something stronger. Other nights, the children visit camps of other witches for competition. Here, mystical soccer matches are played on mysterious fields in places I’ve never heard of, where the cursed children use human heads as balls and compete for great cups of flesh.’

Reading such things made me realise that my child terrors of wispy ghosts and spiders in the bed were as nothing compared to what Malawian children (and adults) live with. No wonder the raging God of the evangelicals is seen as worthy of belief. Night terrors in this part of the world take on a magnitude of which even I never dreamt in my worst nightmares.

I am wondering now what Limited thinks of the framed photograph of my Shaman Goddess (see below)  from Yakutia in the Russian Far East! Constructed from bones and feathers and charms and goodness knows what, Greg saw it when he was in Yakutsk on business and took the photo knowing I would love to have it. I had it framed and usually put it by my front door but in this house I have it hanging in our dressing room. It must terrify the hell out of him. Not that he has said anything. Then again, maybe it is like the rampaging Christian God… so terrifying that he figures it protects from the even more dangerous Malawian demons. On that count I have to say it gives me comfort. 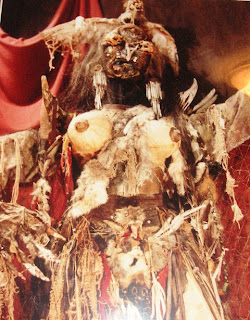 It is also Death which rules this world where malnutrition, malaria and Aids cut swathes through short lives and longer lives and where, as William Kamkwamba says you ‘run into men and women named such things as Simkhalitsa (I’m Dying Anyway), Malazani (Finish Me Off), Maliro (Funeral), Manda (Tombstone), or Phelantuni (Kill Me Quick). Many change their names, he says, once they’re older, like his father’s older brother who was named Mdzimange, which means Suicide.

Reading this rather put Limited’s name into both context and perspective. It made me realise that it probably meant Limited in exactly the way it sounded… that life was limited… and yet it also made me realise that his name could have been far, far worse and far more limiting.

How little we understand until we gain some knowledge of the meaning behind things. Because there is always meaning in everything that happens and there is purpose in everything we do. We may not know the meaning or the purpose but we should never forget that it will be there… that there will be a reason why something happens.

It makes me think that the negative names might be a form of ‘magic thinking’; the sort of thing children do to ‘ward off’ bad things. If you think the worst then you will not be caught unprepared and you will also send out magic which will help prevent it happening.

Perhaps the origin of some of the scariest fairy tales and myths was to achieve just this end. And who are we to say it does not work. If you believe something then it will work to greater or lesser degrees depending upon the power of belief.

With death such an ever-present part of life as it is in Africa, no doubt giving your child a name which ‘tells’ death that you know what might happen and you ‘laugh’ in its face, is a form of protection, or talisman against it actually happening. I can think of no other reason why you would call a child Tombstone or Suicide!

A young lady probably between the ages of 20...
FaceofMalawiNEWS