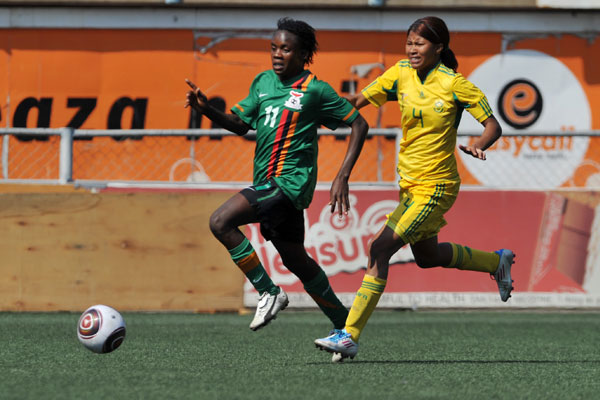 Striker Rufaro Machingura bagged a staggering five goals as the Mighty Warriors thumped hapless Malawi 8-2 in their second match of the Cosafa Women Championship on Monday.

With Fifa President Sepp Blatter in attendance, the Zimbabweans put up an enthralling performance before a packed Rufaro Stadium.

Machingura opened the scoring for the hosts as early as the eighth minute, only for Malawi skipper Linda Kasenda to equalise 10 minutes later.

Ndlovu got her second two minutes later as Zimbabwe went to the break with a 4-2 lead.

Machingura then hogged the limelight in the second half with four more goals as the Mighty Warriors underlined their status as one of the tournament’s favourites.

“I am very happy that I scored five goals. I didn’t expect it,” Machingura said adding, “I did what I was told by the coaches to use my body, height and power.

“And the support I got from the fans cheered me up and spurred me to score more goals.”

The Mighty Warriors are set to play Mozambique on Tuesday afternoon.