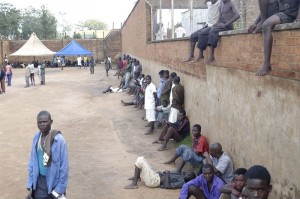 I went on one of my usual Tuesday morning trips to Chichiri Prison with Rev Chimesya and Rev Mike Burns (from Canada). I was asked to speak to the people in the women’s section and it was my first visit over to that side. It is much less crowded there and there are a few small children there with their mothers.

On the way out I briefly said hello to a couple of other visitors – one a young British woman and the other someone I recognised as a regular visitor – someone from St Columba CCAP who I think is involved in the prison ministry work.

[Fisherman’s Rest is a lodge / restaurant / coffee shop and library with great views over the Shire Valley. It was set up by an Englishman called Victor who had previously worked in Nsanje in the far southern most low lying and malaria infected part of Malawi. It is something run along Christian lines and provides very nice accommodation or is a great place to relax for the afternoon or even have a birthday party – see another recent post on that].

So at lunch I mentioned to Amelia and her English friend Sue that there was an alternative to the shopping trip they planned for that afternoon. How about we go to Fisherman’s Rest instead with Lillee (5), Ruth (3) and David (5 months)? They seemed keen but were a bit unsure about transport. I helpfully suggested that Rev Chimesya may also go and then we would have two vehicles and he’d have enough room for Sue and Lillee. I called him and he was most agreeable but we needed to rendezvous and Sue pointed out that she was relying on us to get her and Sue back as Kelvin could drop them off but not pick them up.

When we did meet and everyone was on board I discovered that the meeting was not at Fisherman’s Rest but inside Chichiri Prison. Amelia said that my face was a picture when the penny dropped.

I was slightly surprised – instead of interrupting a ladies trip shopping for a relaxing afternoon at Fisherman’s Rest I was taking two unsuspecting women and three small children into Malawi’s largest prison. It was too late to change plans as Kelvin had dropped them off and they were not interested in Shoprite on that particular day.

“At least it will be interesting.” was something like the view expressed.

In the car park courtyard inside the prison I noticed a minibus with a whole lot of young people (from Scottish universities as it turned out) wearning blue T-Shirts with STORM written on the front. We introduced ourselves and discovered that some were from Perth (Scotland) and that STORM stands for Short Term Outrearch in Malawi. They were here to deliver soap and sugar to the inmates as well as to speak and to sing some songs. They were based at Fisherman’s Rest who were the people organising the trip.

On entering the prison I could see that all the prisoners (on the male side this time) were gathered in the huge courtyard below where we were (so perhaps 1,500 or more people). We certainly were a curious sight – so many Azungu and half of them female. Ruth’s arrival caused a stir or even cheer as the prisoners reacted with great appreciation to the sight of a three year girl. I indicated to her that she should stand up on the bench and wave to everyone.

The group of students then introduced themselves and sang some songs. We simply sat next to them in a ‘who are they and what are they doing?’ kind of capacity. It was a good feeling however, a bit like being up on stage with a popular band.

After a while the female students left with Amelia, Sue, Lillee, Ruth and David to go to the women’s section. The male leader of the group then spoke through a translator to tell the prisoners about Christianity. I thought that next time this is done it would be good for them to come along to a bible study so that the prisoners could teach tell them about their Christianity. The biblical knowledge of a number of the prisoners leaves many visitors gob-smacked. The prisoners also know how to sing.

Afterwards I joined the male students in distributing all the bars of soap that they had in the cells. It was the first time I had been into the cells. Now at last I could see where they spent most of their time and how much space they had to share between such a large number.

I am pleased to say that they have now been given a ball and another two are on their way thanks to a donation from visitors from the PCC (Presbyterian Church in Canada).