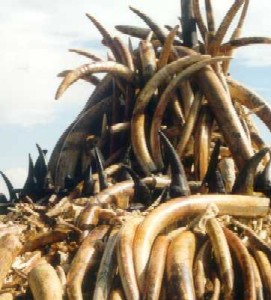 Tonnes of contraband ivory will be destroyed tomorrow in accordance with Cites and other internationally agreed standards.

The consignment is part of 6.5-tonne contraband elephant ivory that originated from Zambia, Tanzania and Malawi.

The huge consignment was seized in Singapore in June 2002 and authorities repatriated the ivory to Lusaka Agreement Task Force (LATF) for action.

According to the Ministry of Forestry and Wildlife, a total of 335 tusks and 41,553 hankos would be destroyed by the ivory disposal implementation committee, comprising KWS and LATF.

A consultative ministerial meeting held in Nairobi last year agreed to repatriate part of the contraband to Malawi and Zambia for educational and prosecution purposes.

On Monday, the Minister for Forestry and Wildlife Noah Wekesa led a high powered delegation to KWS Field Training School, Manyani in Taita-Taveta County, where the contraband ivory will be destroyed.

Briefing the Press after the minister’s visit, the Head of Communication in the Ministry, Mwangi Gakunga and his counterpart in KWS, Paul Udoto said the Government identified Manyani Field Training School as the best site for safety and maintenance of the ivory since its arrival in 2004.

“LATF deemed it prudent that the school be recognised for its roles in securing the contraband ivory and building wildlife law enforcement capacities,” they said.

They said the disposal event funded by different agencies entails the actual incineration of the remaining contraband, an event that woul be carried out during the African Elephant Law Enforcement Day celebrations this week.

“Kenya is working under the Lusaka agreement and is playing host to other countries in burning ivory and showing its commitment in the fight against widespread poaching across Africa,” he said.