The tone rises between Malawi and Britain 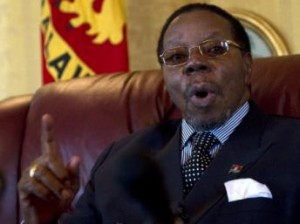 The President of Malawi, Bingu wa Mutharika said on Sunday 17 July, he did not intend to apologize to London for expelling the British ambassador whose criticism of the plan was revealed by WikiLeaks site. The quarrel became more pronounced after the suspension of budget support British last week: a kind of sanction imposed by London, concerned about the problems of governance in the rural country of fifteen million. It is also to expose these difficulties that opponents of the power to organize demonstrations across the country Tuesday, July 19.

Opponents of Malawi and London seem to be on the same wavelength, which displeases strong to President Bingu wa Mutharika. It has banned gatherings of the first and fired the British ambassador.

Opponents, religious leaders and members of civil society were expected to protest in cities across the country, Tuesday, July 19 to protest against shortages of gasoline, drugs, foreign currency, and against power cuts . They also complain of serious problems of governance.

London, meanwhile, had decided to suspend its aid budget last week, precisely because of the failure of Malawi to address its concerns in economic management and governance. The fact that Mutharika has dubbed his brother as party candidate for president in 2014, concerned the Foreign Office, who had shown little praise to the president in a diplomatic cable Malawi updated by WikiLeaks. About who had earned the author of the note to be expelled.

According to a local newspaper, Bingu wa Mutharika would not have the missing links with its Vice-President, Joyce Banda, and is even to stop it. She would have voted against the ban on rallies in Malawi.