AFTERMATH OF DEMONSTRATIONS IN MALAWI ON 21st JULY, 2011 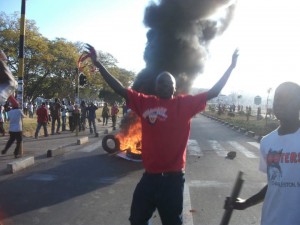 Confirmed reports via Joy Radio indicate that tension has not improved in the capital city of Lilongwe.  Roads are reported deserted with no mini bus allowed into the city. Some people are reported to be hiding in Mosques. The  Police are manning roadblocks on most roads to bring back normalcy in the city. The general feeling is that the situation is bound to explode one anytime.  The gagging orders on all private radios issued  by  the Malawi Regulatory Communication Authority(MACRA) yesterday have not been lifted and the Media Institute of Malawi( MISA) has challenged the order for stifling freedom of information. So far nothing is reported from Mzuzu and other cities.

(Visited 60 times, 1 visits today)
Previous articleREVIEW OF AGGRAVATING FACTORS TO THE VIOLENT DEMONSTRATIONS IN MALAWI
Next articleMISA MALAWI STATEMENT ON MACRA BAN ON COVERAGE OF RIOTS AND BEATING OF JOURNALISTS IN MALAWI