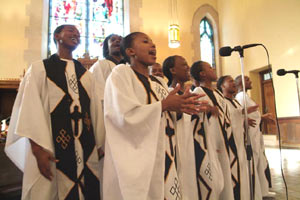 Padre Pio Catholic Church on Sunday launched their 13-track album titled Simbani at St. Kizito hall (Chigoneka) in Lilongwe. The 13-track album is a collection of angelic lyrical content of praise, worship and joy with some rendition of songs that were already composed in hymn books and have been improved over time.
Patrons that flocked St. Kizito were treated to the latest offerings but also other support choirs that offered support and solidarity to their counterparts as they launched their album.

This is 4th album to be launched by the Padre Pio Choir 1 and just like the previous offerings; the story of success and continuity in the album stands key.
Padre Pio is an outstation of the Kagwa Woyera Parish in Lilongwe