In Malawi and beyond, child workers as young as five are being exposed to the toxic dangers of tobacco harvesting 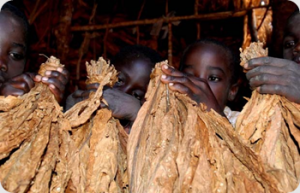 At the height of the tobacco harvest season, Malawi’s lush, flowing fields are filled with young children picking the big green-yellow leaves. Some can count their age on one hand.

One of them is five-year-old Olofala, who works every day with his parents in rural Kasungu, one of Malawi’s key tobacco growing districts. When asked if he will go to school next year, he shrugs his shoulders.

One thing is clear to Olofala already: work comes first, education second. His sister, Ethel, 12, is only in year three. She attends school irregularly because she has to work, or because she is sick. “I cough,” she says. “I have chest pains and headaches. Sometimes it feels like you don’t have enough breath.”

Such complaints are not uncommon. Many of Malawi’s estimated 80,000 child tobacco workers suffer from a disease called green tobacco sickness, or nicotine poisoning. Symptoms include severe headaches, abdominal cramps, muscle weakness, breathing difficulties, diarrhoea and vomiting, high blood pressure and fluctuations in heart rate, according to the World Health Organisation.

Since the handling of the leaves is done largely without protective clothing, workers absorb up to 54 milligrams of dissolved nicotine daily through their skin, equal to the amount of 50 cigarettes, according to 2005 research by Prof Robert McKnight, of the College of Public Health at the University of Kentucky, Lexington. Farm owners routinely plead ignorance of the health implications. “I never heard about touching tobacco leaves being dangerous,” says Fraston Mkwantha, who plants 15 hectares of tobacco in Kasungu district.

At the consumer end of the chain, smokers are constantly reminded of the associated health risks. Most are oblivious to the reality that, far from harming only themselves, their toxic habit is slowly killing the underage children involved in the production process.

Until the 1980s, much of the world’s tobacco was grown in the US. Today, however, about 85% of worldwide production comes from the global south, where tobacco child labour is a major problem, according to a 2010 US Department of Labour report (pdf).

“In any developing country where tobacco is grown, you find child labour starting at the age of five,” says Marty Otañez, a researcher at the University of California’s tobacco control research and education centre.

Malawi, which has the highest number of child labourers in Africa, is a key offender. Health issues aside, children are also financially exploited. Olofala and Ethel often work 12-hour days, but neither earns a salary. They “help” their parents, who work on one of Kasungu’s 22,000 registered tobacco farms and estates. Other kids receive an average of $0.25 for long hours of unrelenting work.

They are arguably the lucky ones; some never see their money at all. “We have many reports of children who were lured into labour with promises of good pay. But at the end of a season, all they get is an old sweater,” says Grace Masanya, Malawi project manager for Plan, the international child rights NGO.

At the heart of the problem is Malawi’s poor economic situation. Parents involve their children in economic activities to provide food for the family.

Over the past decade, the country has become one of the five largest tobacco producers in the world, largely due to low tariffs on unmanufactured tobacco imports, cheap labour and lack of regulations. According to the UN’s statistical division, more than 98% of Malawi’s low-cost leaf is exported, with the EU and the US top destinations.

And more than 90% of Malawi’s tobacco is bought by two US-based leaf buyers, Universal Corporation and Alliance One International, which resell it to international tobacco firms. Their main clients are two of the world’s biggest cigarette manufacturers, Philip Morris (Marlboro) and British American Tobacco (Lucky Strike). Consequently, Malawi’s tobacco is found in the blend of almost every cigarette smoked in the west.

The country is a signatory to the UN and International Labour Organisation (ILO) child labour conventions, and also has its own legislative framework barring the employment of children under 14. So why does the government turn a blind eye? The answer is simple: Malawi’s economy is heavily dependent on tobacco, which makes up 70% of its export earnings, according to the UN Food and Agriculture Organisation.

“Some estates follow anti-child labour regulations, but others purposefully flaunt the law in the interest of higher profits,” says Plan Malawi advisor MacDonald Mumba. Over the past two years, only 49 farm owners have been prosecuted in Malawi, he says. Most received a $34 fine.

Gaps and inconsistencies in Malawi’s legislative framework contribute to the problems of child labour, according to the ILO.

“The legal framework is very weak,” confirms Unicef child protection programme officer Tomoko Horii, who believes promises to eliminate child labour amount to little more than window dressing presented in response to mounting international pressure. The laws lack specific targets to reduce child labour and, most importantly, an appropriate budget. “The budget allocation is minimal. So far all projects have to be financed by international NGOs,” says Horii.

The tobacco giants, who all have anti-child labour policies in place, insist they abide by the rules. British American Tobacco (BAT) says on its website that it does “not employ children in any of our operations worldwide”, but admits that using intermediaries to purchase tobacco makes it difficult to trace the country from which they buy the leaf and ensure all farm owners follow the rules.

That is bad news for countries such as Malawi, where the education system is feeble and only a third of children complete primary school. “Unless the education sector scales up to offer quality education to all children, they will continue to work,” says Horii.

Tobacco growing is extraordinarily lucrative for the industry. Financial reports for 2008 by the five big tobacco companies – BAT, Philip Morris, China National Tobacco Company, Imperial Tobacco and Japan Tobacco – show that they collectively earned $300bn. This is more money than the GDP of all but 40 countries worldwide.

Part of the reason for those huge profits is that tobacco giants benefit from $1.2bn in unpaid child labour costs, according to Otañez’s colleague Prof Stanton Glantz. Replacing child labour with adults paid the minimum wage would increase the production costs by $10m per year in Malawi alone, he says.

For Glantz, the solution is simple: “If major tobacco companies were genuinely committed to improving the socio-economic conditions of child workers, they should rectify harmful business practices by enforcing a policy that they will not purchase any tobacco grown using child labour.”

The tobacco giants disagree. “Simply stopping altogether our purchases of tobacco from Malawi will do nothing to alleviate the serious issue of child labour in this country,” says Anne Edwards, director of external communications for Philip Morris.

While this standoff continues, the people of Malawi benefit little from their “green gold”. Malawi remains one of the least developed nations in the world, ranking 153 out of 169 countries on the 2010 Human Development Index. About 40% of the 13.2 million Malawians live below the poverty line of $1.25 a day.

• Kristin Palitza is a freelance journalist based in Cape Town, South Africa. The research for this article was financially supported by the Fund for Investigative Journalism in Washington DC.