As 21st September approaches I smell a rat. The Civil Society Organisations (CSO), have withdrawn from the United Nations (U.N) mediated talks with the Government and have since decided to proceed with their vigils, but after the events of 20th July is this really a wise decision?

What are CSOs’ real intentions? I understand that maybe the dialogue was going nowhere because of big egos from both sides and no one wanting to be told what to do by the other, but are the vigils the right way to go, because honestly I believe they will only cause more harm than good.

I mean the CSOs may say the vigils will be peaceful, but these intelligent men and women and anyone with half a brain will know that there will always be opportunists who will cause havoc.
Malawian Police, as was evident on 20th July 2011, are trigger happy and poorly trained and equipped to handle crowds. A few heated words and disagreements, and some thugs in the crowd will seize the moment and start an uproar so that there is total chaos and they have a chance to vandalise and loot property.

The CSOs say that one of their concerns is the national economy, but 20th July has shown the negative impact demonstrations and vigils have on the economy. Not only were hundreds of millions of Kwachas lost due to looting and vandalism but also due to closure of businesses and financial institutions meaning the economy goes for between 24 -72 hours with no activity meaning there is no production and income is lost.
Peoples Trading Centre has permanently closed a few of its shops due to bad performance and one or two that were destroyed on 20th July , meaning people have lost their jobs, and sources of income, and with the burning down of Blantyre Flea Market, probably a major player in the country’s economic activities, we have property, goods lost and even more people losing their sources of income meaning people will have less disposable income and the sales in the economy will dwindle slowing growth and lowering peoples’ standard of living. So what happens if the 21st September vigils get rowdy and more business properties are destroyed and goods looted?

Allow me to give the CSOs some food for thought; one of the issues you want to protest about is the forex shortages, but Malawi needs to find an alternative forex earner apart from tobacco and tourism is seen as the best alternative, but when a country has political unrest and there is violence on the streets, which holiday makers in their right minds will put that country on top of their most desired holiday destination. 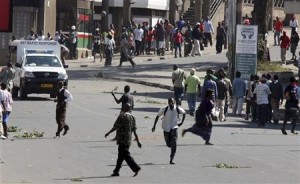