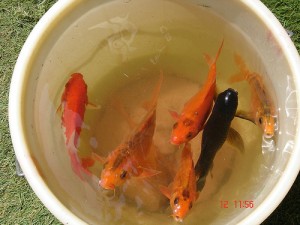 Some species of catfish are very popular in the aquarium. Some are remarkable for their huge sizes.

Tiger Sorubim belongs to Pseudoplatystoma genus. This catfish is commonly known as the Tiger Shovelnose Catfish in the aquarium hobby. This uniquely patterned catfish can be found in South America.

Sturisoma panamense is an unusually shaped species of catfish which can be found in Panama, Andes, Orinoco River, Parana River and Amazon River. This fish lives on gently to swiftly flowing waters where submerged wood is abundant in the main flow of rivers.

This uniquely patterned armored catfish which is often sold as Common Pleco is usually purchased as an algae eater like the Janitor Fish. It is also known for a variety of common names such as Sailfish Catfish, Many-rayed Pleco and Radiated Ptero.

Gold Spot Pleco is an armored freshwater catfish that can be found in South America. It can grow up to30 cm and mature females are usually larger than males.

Pterygoplichthys gibbiceps is another freshwater armored catfish that can be found throughout river basins in the Amazon region of South America. It can grow up to 20 cm long and has a lifespan of more than 20 years.

The Malawi Squeaker is a species of unique-looking catfish that inhabits freshwater lakes. It can be found in the African countries of Mozambique, Tanzania and Malawi, where its common name was derived.

Sturisoma aureum is a catfish that belongs to the genus Sturisoma like the Sturisom panamense. Catfish on this genus has been shown to be sister to Farlowella. They are widely distributed in the rivers of Orinoco, Parana and Amazon.

Upside-down Catfish is an unusual catfish which is remarkable for its habit of swimming upside down most of the time. The nocturnal Upside-down Catfish originate from Africa, particularly in the Central Congo basin. It is also a famous aquarium fish and feeds on flake food, tablet food, frozen bloodworm and live food as daphnia.

The nocturnal Electric Catfish is a peculiar catfish that has the ability to produce an electric shock of up to 350 volts. It can be found in the Nile River and in tropical Africa. It primarily feeds on other fish by incapacitating its prey with electric charges. It can grow up to 100 cm in length and can weigh up to 20 kg.

The Suckermouth Catfish is an armored tropical catfish that is of great value in the US aquarium trade. In the Philippine aquarium trade it is called the “Janitor Fish”. It is usually purchased for its ability to clean algae from fish tanks. This hardy fish can grow up to 50 cm or longer.

The Zebra Oto is a uniquely patterned catfish that originates from Peru. It has become popular in the aquarium trade since 2000. This armored catfish is small and have a suckermouth. It is also commonly known as Tiger Oto.

Scleromystax barbatus shows high sexual dimorphism where females are much larger than male species. The dorsal and pectoral fins of male S. barbatus reaches the caudal peduncle and its well-developed odontodes are inserted in fleshy tissue on a large area on the sides of the snout in fully grown males.

The toothless Mekong Giant Catfish is a very large species of catfish. This catfish grows so fast attaining 150 to 200 kg in just a matter of 6 years. This catfish which is endemic to Mekong River is in danger of extinction due to overfishing. The largest catch recorded in Thailand was a female measuring 2.7 meters long and weighed 293 kg. It was caught in 2005 and is widely recognized as the largest freshwater fish ever caught.