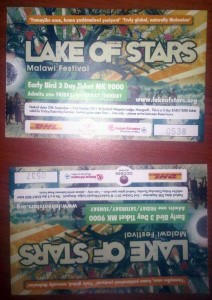 Over the weekend of Sept. 30 through Oct. 2 all roads in Malawi led to one place — Mangochi, and specifically to the shorelines of Lake Malawi at Nkopola Logde, where thousands of fun-seekers from across the globe convened in the annual intercultural and interracial event called Lake of Stars Malawi Festival.

The 2011 Lake of Stars Festival has so far been described as the best ever since the event was borne eight years ago as it drew artists and patrons from Britain, France, Sweden, Japan, China, and the United States besides the local and others from Namibia, Rwanda, Kenya and South Africa.

|”This is the biggest crash of cultures, a conflict of traditions yet so peaceful and harmonious, inspiring and uplifting you would wonder why many still think it matters to be black or white,” said one Australian patron, Andy Smith, in a random interview, Sunday.

And the director of Lake of Stars Festival, Tom Porter, described the 2011 event as ”a huge success.”

”This year’s Lake of Stars Festival is the biggest music talent people have ever seen,” said Porter in an interview with Xinhua Sunday as the event wound-up, ”Last night was the best night so far in the history of Lake of Stars event.”

Porter applauded Chinese involvement in the event saying it was very wonderful to watch Chinese Culture in Malawi, through Chinese opera performed by Chinese Conservatory artists.

”The coming together of people of various nationals, culture and tradition in such event does not only help boost the economy of the country but it also cements the international relations of the participating countries,” observed Porter.

On the other hand, Malawi Tourism minister Daniel Liwimbi said during the official launch on Saturday, the Lake of Stars event was becoming a strong tool for generating forex in the country in the wake of morbid output from the country’s green gold, tobacco.

”As Malawi Government we are encouraged to invest in the tourism industry because this area has proven that it can contribute largely to the country’s economy now that tobacco is failing us,” Liwimbi told journalists Saturday at the event.

According to available information, in 2010 the festival raked in 1 billion U.S. dollars of local spend with over a third of the amount being in foreign currency.

Among the talented artists who performed during the 2011 Lake of Stars Festival were Foals, a UK based band, Freshly Ground from South Africa, Coco from Japan, Chizi from Kenya and Malawi’s The Black Missionaries

There were also a wide range of international DJs who kept the audience on the tip of their toes and among them was Chris Baio from the U.S.

Lake of Stars Festival was hatched in 2004 by a British national, Will Jameson, who had visited the southern African country and thought of finding a more creative way of boosting the developing country’s tourism industry.

The festival is now regarded as Malawi’s number one tourist event of the year and it is believed to have exposed over 200 million people to Malawi through global news networks.

According to the organizers of the event, over 3,000 people travel to Malawi from various parts of the world to participate in the annual event.

The 2011 Lake of Stars Festival was also marked with various activities such as HIV voluntary testing, and visits to various international social projects carried out in the district.

As it has been the case over the past years when the event came round, business sector in the district made a kill out of it as research indicated that most items and services such as accommodation had either tippled or quadrupled in prices.