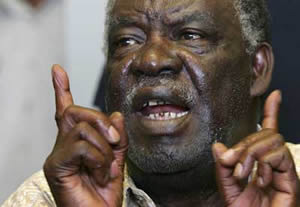 VICE-PRESIDENT Guy Scott says the Malawian Government should not overlook the issue of giving a satisfactory apology to President Sata over the 2007 deportation despite him having sent a high level delegation to attend the 30th Common Market for East and Southern Africa (COMESA) Heads of State and Government summit in Lilongwe.

The theme for the summit is Harnessing science and technology for development.

Addressing local and foreign media during a press briefing at Golden Peacock Hotel on October 13, Dr Scott said there is urgent need to address the matter as it is negatively affecting diplomatic relations between Zambia and Malawi.

“While Zambia is attending the COMESA conference in Lilongwe at high level, it should not be overlooked that there is one major issue negatively affecting the relationship between Zambia and Malawi.

“This is the issue of His Excellency President Michael Sata’s deportation from Malawi when he was in Zambia’s opposition,” he said.

Dr Scott said President Sata has made it very clear that he requires a satisfactory apology, explanation or whatever it may be before relations between the two countries can be normalised.

The vice-president, who arrived in Lilongwe on October 13 at 12:30 hours, said he is personally grateful for the rousing welcome he received at Kamuzu International Airport.

The vice-president said Zambia needs good relations with neighbouring countries but that even if President Sata was deported when he was an opposition political party leader, it is important that the Malawian Government apologises to Mr Sata.

Dr Scott said such an apology should not be given to the delegation he is leading in Lilongwe but go to State House in Lusaka.

He said the failure by the Malawian Government to apologise or give a satisfactory explanation to President Sata is souring diplomatic relations between Zambia and Malawi.

On March 15, 2007, President Sata was deported from Malawi upon his arrival at Chileka International Airport in Blantyre and was driven back to Zambia through Mwami Border in Chipata.

On Saturday, President Sata turned down an invitation by Malawian President Bingu Wa Mutharika to travel to that country to attend the COMESA Heads of State and Government Summit on grounds that the latter has neither apologised nor furnished him with reasons for having deported him in 2007.

But Malawian Government spokesperson, Patricia Kaliati was quoted by the Nation on Sunday of Malawi as having said “as Government, we have heard”.