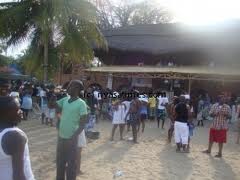 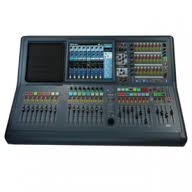 MANGOCHI, Malawi – Held at varying locations along the shore of Lake Malawi on the borders of Malawi, Mozambique and Tanzania since 2004, the Lake of the Stars Malawi Festival’s flown-in and hand-ported audio system included a Midas PRO2C console. More details from Midas (www.midasconsoles.com (http://www.midasconsoles.com/)): The new Midas PRO2C live audio system has passed its first real world challenge with flying colors, handling front of house at the Lake of Stars Festival on the sandy shores of Lake Malawi. The PRO2 faced extreme temperatures of up to 42 degrees C., an abundance of sand and grit plus a severe fuel crisis, which meant power was only available 30 minutes before the festival opened. I really love the PRO2C; it was very easy to get to grips with, and after just 30 minutes I could start the show confidently, says FOH engineer Craig Williams. I’m more accustomed to the Midas Heritage series and the classic XL3, which I will always love, but the tiny footprint and low weight for a festival like Lake of Stars is perfect. Not needing a rack of outboard saves a huge amount in shipping costs to somewhere like Africa, and even more in sweat when you have to handball the kit across a beach in the sun. Williams was using the PRO2C for artists including Beverley Knight, Foals, Africa’s Freshlyground, Malawian music from Black Missionaries and Lucius Banda and a host of international acts. The new Midas MCA groups made a big impression on him. The MCA groups are fantastic and make mix navigation much easier on such a small footprint console, especially with the ‘hide unassigned channels’ in flip mode engaged, he says. My favorite feature of the desk is probably the daylight visible screen; even in the midday African sunshine I could clearly see the screen, something that not a single other digital desk can boast. The channel control panel is great and easy to use without having to hit button after button to get where you want, and the gain/trim feature is really good, giving the chance for example to drive a guitar, bass or kick drum the way I like to with an XL3 or H3000 then allowing some attenuation without digital clipping. I had multiple camera feeds and audio recordings to deal with, so the matrix system was used a lot, it was quite simple to route and patch when the recipients turned up two minutes before they needed the feed that they had forgotten to ask for! Despite this being the first sighting of a PRO2C at a live event, visiting engineers took to it with ease. The engineers for FOALS and Freshlyground both used the desk and both loved it, Keith from Freshlyground being a PRO6 user, says Williams. In fact one of the band’s engineers liked it so much he’s interested in purchasing one for touring. The color coding system for selected channels in the VCA groups is also invaluable in a festival situation on a small desk, and my Malawian ‘students’ were particularly fond of red, gold and green… Ultimately however, it was the PRO2C’s sound quality that came out on top for Williams. What I really like most about it is the way it sounds; it doesn’t sound cheap and grainy like many other digital desks, and the depth of field is beautiful, he says. All in all, the desk performed without a glitch for three days in extreme heat and environmental conditions, more than can be said for my body! jokes Williams. This console wipes the floor with its competitors. It’s easier to use on the fly, sounds better, seems more stable and is generally more pleasant and straightforward to use, plus of course it’s a Midas and is laid out in the same familiar style as their classic analogue consoles. Comments Lake of Stars founder Will Jameson, The festival was borne from a desire to raise money for a developing economy, promote Malawi as a top travel destination and expose Malawian artists to international crowds, as well as putting on an amazing event that now forms part of the global festival circuit. Midas was one of the festival’s many technical partners to provide free audio visual equipment, helping raise a profit for the local economy. Last year the festival generated $1,000,000 in local spending, employing more than 100 Malawian people and providing a major boost to local families and businesses. The festival, which attracted 3,500 people this year from across the globe, also ran an outreach program with ballgames, acoustic performances and an HIV screening clinic. We are so happy to welcome Midas to our family of technical partners, continues Jameson. We have always used Venice desks but to have use of the PRO2C is incredible. All the bands loved it and it coped well with the heat and sand of Malawi – it is also a good size and weight when it comes to being air freighted all the way from the UK. The high production standards set Lake of Stars apart from other events in the region, and having the world’s leading console manufacturer involved in the project is a massive boost for us and for Malawi’s music industry.

Previous articleShe liked The Maravi Post on Facebook and won!
Next articleA look at what is going on at Paladin Energy