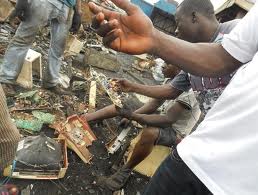 This research focused on how some environmental activities affect people’s lives concerning their rights.  Our main focus dwelled much on two dumping sites in the country popularly known as kuntaya and the lack of public toilets in the markets.  This is where all the garbage collects, and it becomes a proper breeding place for mice, cockroaches, snakes, etc.

A survey done by the Ministry of Health shows that diarrhea broke out in this area in the year 2002 during the rainy season.  The report further explained that it was because of the unsafe water that the people in the area were drinking was the source is the catchment area where the dumping area is also situated.  According, to the laws of Malawi every human being has a constitutional right to life, which is also inclusive of having a sanitary surrounding so as to live a healthy life.

But according to Blantyre City Council the public relations officer Mrs M. Khanga said, they located the dumping sites away from areas where people live so they could easily monitor it. She said it is just some naughty and inquisitive occupants that have migrated to these areas hence making it hard for the council to monitor the progress.  She further said living in such areas is dangerous because some of the garbage is toxic and can cause harm to the lives of people in the area.

However, the people living in the areas argued that it is because of lack of proper land for settlement that made them move to this area.  They said they have pleaded with the city assembly so many times before to stop using the area as a dumping site and to start considering the safety of the people living there. Because they are also Malawians and they have their rights, and also considering that people were already living in some of these places before they (the city council) started dumping garbage there.

They further said this is affecting their children academically as most of the times the children have to miss lessons because they are down with either diarrhea or malaria since the dumping places have also become breeding places for mosquitoes among other things. So many organizations have since come into negotiate with the government to spare this place and explore other inhabited areas for the cause but nothing has been done about this lately.

These organizations are also playing a role of civic educating the people on their rights to conserve and protect nature, which is also contributing to the Millennium Development goal number 7, which ensures the environmental sustainability.

Because people are not getting proper land for settlement, they have resorted into building their houses in the mountains where they think they might be at peace with the environment since they cannot afford living near dumping sites. People cut down trees carelessly in order to make the place as conducive living place as possible. This compromises the hydrological cycle and as a result this brings about climate change, which includes erratic rains, global warming, increased skin cancer cases etc.

“We are trying as much as we can to help the people living in the area because the cleaner the condition people live in the minimal the cases of diseases in the hospitals thereby reducing the money spent on buying drugs in the hospitals,” said the public relations officer.

The other situation, which is deemed a clear violation people’s rights, is the lack of public toilets in the public markets. Like Limbe for example, a market that serves more than 100 000 a day has only five working toilets. The place stinks and the market has no running water, which is very insanitary. Because people don’t recognize their rights they just think it’s a normal condition for them.

The Malawi nation has to work towards improving the living conditions of people living around the dumping sites. This may reduce the rate of diseases in the hospitals, which may also reduce expenditure on drugs.  The government has to make sure to build enough toilets so that there is sanitation in markets.