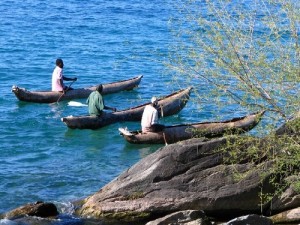 As scientists call for increased investments in aquaculture to reduce fishing pressures on Lake Malawi, one of the world’s fresh water bodies and home to over 500 endemic species, a recent study reveals that lack of steady supply fish feed is one major challenge. Senior scientist at the World Fish Centre in the country’s Zomba city, Dr. Daniel Jamu says it is urgent that the country finds alternatives to the falling fish stocks, a source of proteins to the country’s population of 13.1 million people. “You see, our water bodies have declined and are on the edge, so it is very important that we venture into aquaculture to preserve rare fish species, especially the Chambo (Oreochromis shiranus ) which is the country’s pride,” he said. But a study conducted by Priscilla Longwe of Bunda College of Agriculture has established that the supply of feed for the fish, in the country, has been poor in the past years.  Since 2008, the basic materials required for fish feed, such as maize bran, wheat bran, sunflower cake, groundnut cake, and pigeon pea cake have been scarce in the country and, hence, expensive,” she says.

A report by the United Nations Environmental Programme (UNEP) released last year warned about the need to develop early warning systems for imminent disturbances of the hydrological circle triggered by the increased precipitation and evaporation over Lake Malawi. The report warns that the climatic conditions on the lake can either result in floods or declined lake levels. “A small increase in precipitation and evaporation ratio on Lake Malawi can result in flooding as was the case in 1979-80,” says the report adding, “in contrast, a small decrease in the ratio results in the basin becoming closed as was the case between 1925 and 1937. “Lake Malawi’s water level has been declining in recent years and the lake came near to being closed at the end of 1997,” it says. Simultaneously, the supply of fish from the lake has declined from about 30, 000 tonnes a year, in the past 15 to 20 years, to 2, 000 tonnes, according to a research outfit, Research Into Use (RIU). RIU says declining fish stocks are a result of population growth and over fishing, among other reasons.

According to the Ministry of Finance and Development Planning, fisheries resources contribute to the livelihoods of more than 1.6 million Malawians and almost 60,000 individuals are employed as fishers with about 450,000 engaged in fisheries-related economic activities.  The landed value of fish was MK9.4 billion (US$67.1 million) in 2008, a significant contribution to the economy’s total output. Traditionally, fish has been the most affordable source of animal protein, but the real price of fish (after accounting for inflation) has increased by about 3.5 times over the period between 1987 and  2007. Over the same period, the population of Malawi grew by about 61 per cent from 7.9 million to about 13.1 million, while total fish supply has fallen by 20 per cent. As a consequence, per capita fish consumption has fallen from 9.4 kg to 5.4 kg between 1990 and 2008. The output of cultured species, valued at US$ 1.4 million in 2008, has grown by 52 per cent over the period 2000 – 2008, and contributes about 2 per cent of total fish production and is very far from meeting the excess demand for fish. Longwe believes that with the necessary inputs and a constant flow of activities, an aquaculture farm of over 15 ha in Malawi, can produce up to 30 tonnes a year with associated returns of up to K9 million (US $64,286).

In her study, Longwe, cites Gopi Krishna (GK) Aqua Farms as an example of a striving aquaculture industry. She says, GK Aqua Farms, situated in Malawi’s southern region district of Chikwawa with 19 ha (47 acres) of its land under water, became commercial in 2004 demonstrating its potential profitability by attaining gross margins of over K3 million (approximately US $21,430) in one year.  The farm was previously owned by the Fisheries Department, under the Ministry of Natural Resources and Environmental Affairs.  “The farm raises three species of fish such as common carp (Cyprinus carpio), Tilapia rendalli and Oreochromis shiranus which are sold in the district and the neighbouring commercial city of Blantyre,” she says.  “Since 2004, GK Aqua Farms has had a continuous rise in production from 4.2 tonnes per year to 29.5 tonnes per year in 2008 with an expectation of similar increases over the next few years,” Longwe says in her study report.  According to the report, fish farming in Malawi began as early as 1906 with the introduction of rainbow trout (Onchorhynchus mykiss) for angling.  “The use of indigenous species in fish farming began in 1956/57 with the culture of Oreochromis shiranus and Tilapia rendalli and with the establishment of the Domasi Experimental Fish Farm for the breeding and distribution of these two species to farmers,” says Longwe.

Pond culture is the main fish production system practiced in Malawi. Cage culture is carried out in a very few isolated cases including that by the Malawi Development Cooperation (MALDECO).  The two tilapia species, Oreochromis shiranus and Tilapia rendalli are the country’s main cultured species, with growth rates exceeding 150 g (0.33 pounds) when grown for 6 months.  “It is for this reason that they are considered the most suitable fish for culture by small-scale fish farmers in Malawi,” Longwe points out and explains that the Common carp (Cyprinus carpio), a faster growing exotic species, was introduced into Malawi in 1976 but further importation and distribution to farmers was later prohibited in line with the Fisheries Conservation and Management Act (1997), which restricted the introduction of exotic species to protect Malawi’s fish biodiversity.  Currently Malawi has 7000 to 8000 fish ponds covering an estimated total area of 208 ha however only about 4, 000 are operational, according to RIU.  The annual fish production in 2009 from aquaculture was estimated at2000 tonnes, a significant increase from the previous estimate of 800 tonnes. The increase is attributed to the introduction of different culture facilities in some of the commercial farms in the country, such as the introduction of cages at the MALDECO farm.  Longwe says “policy makers and researchers should work on challenges that are faced by aquaculture investors in Malawi in order to improve the economic figures of the country’s fish farms”.