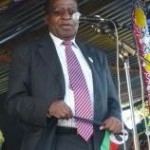 Apparently inspired by newly-elected Zambian President Michael Chilufya Sata, aging Malawi Congress Party (MCP) John Zenus Ungapake – JZU- Tembo says he would seek a third run for the country’s presidency in the 2014 General Elections. Sata, 74, recently led his opposition Patriotic Front (PF) to the historic victory Zambia to become president after two previous failed attempts. According to malawian media, the 78-year-old veteran Malawi politician told Zodiak Broadcasting Services that he is ready to serve the interest of MCP supporters unless a convention decides otherwise. “I want to serve the people of MCP and I am ready to do that if they want me to do so but all this will be done at a convention,” Tembo told the Zodiak. Tembo is barred by the party constitution to contest for the presidency under the MCP ticket for the consecutive third time. He however believes that the convention can have the powers to amend the constitution to allow him stand in 2014, saying despite his advanced age he has the welfare of young people and that he can lead Malawi better. “I was a Minister when I was 30. I know the needs of young people. As MCP we ruled this country better,” he said. Asked if he has been inspired by the election of Sata to become Zambia’s fifth president, Tembo said he was happy that “Sata whom had struggled as opposition leader had won in Zambia”. If he indeed contests in 2014, then Tembo becomes the second known presidential candidate in 2014 after the ruling DPP already handpicked younger brother to the President, Professor Peter Mutharika. Former MCP secretary general Chris Daza, who expressed interest to challenge Tembo as MCP presidential candidate was recently expelled as party’s CEO. However, Daza was granted an injunction granted by Lilongwe High Court to be reinstated to his position and reclaim party membership. High Court judge Chifundo Kachale grated the injunction ordering Tembo and the party’s National Executive Council to recognize Chris Daza as the secretary general and to allow him to exercise his duties as such. A MCP has slightly over 40 political districts and so far, 34 political districts out all districts want MCP national convention “soonest”.

(Visited 22 times, 1 visits today)
Previous articleMALAWI…”DO WOMEN HAVE TO DIE IN ORDER TO GIVE LIFE?”
Next articleMalawi Fuel Pump Prices Up