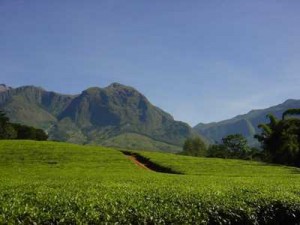 It’s more than half a century since Laurens van der Post’s expedition to Mount Mulanje in Malawi ended in tragedy. Here, his friend retraces the writer’s journey

I climbed a mountain in Africa at an age nearly too old. Before I did, I mentioned the idea to a friend. “This,” she said, “is the start of dementia. You are 74. You know little about climbing. It is irresponsible!”

But I had a purpose in going. This concerned the South African writer Laurens van der Post, a friend of mine in his old age. In 1949, on a mission for the British government, he flew to Nyasaland (now Malawi) and journeyed across Mount Mulanje with two foresters and some porters to assess the mountain’s livestock capacity. During a five-day rainstorm one of the foresters, Fred France, was swept over a precipice by a torrent; the rope holding him snapped and he was killed. Laurens’s bookVenture to the Interior, which became a bestseller, describes the accident.

After Laurens died, JDF Jones, known to all as JDF, wrote a biography of him. Concerning Venture to the Interior, JDF claimed Laurens had “absurdly inflated the mystique and menace of Mulanje, and the scale of his expedition”. I felt the disparagement was wrong. I resolved to retrace Laurens’s journey on Mulanje and find out for myself.

I asked Chris Badger of Wilderness Safaris in Malawi to arrange the trip for May, the month Laurens was on the mountain, but he demurred, saying: “Some of the dry riverbeds are currently raging torrents.” So I went in September.

I flew overnight to Johannesburg, then to Chileka airport, near Blantyre. Michael Muyafula, one of Badger’s guides, met me there. In the afternoon heat and glare he drove me towards Mulanje, some 70 miles away. The roads swarmed with people of all ages, some walking, some on bicycles freighted with massive loads. The most notable was a trussed pig, stretched out on a board and draped with banana leaves to keep it cool.

Eventually, at the far end of a plain Mulanje appeared, an immense form of dark rock rising perpendicular for several thousand feet, withdrawing somewhat, then rising sheer and magisterial again. Wraiths of mist drifted across its lower reaches. It conveyed an atmosphere of tranquil power, and I understood why Rider Haggard had used it as the setting for his novel People of the Mist.

Ascending gradually to about 2,000ft, we reached Likhubula Forest Lodge, my resting place for the night at Mulanje’s base. There I met the lead guide, Mckenzie Chitseko. I produced my map, and he marked the route we would take. Talking with Mckenzie and Michael, I saw that Chris Badger had chosen well. They had a quiet assurance, and spoke knowledgeably about the mountain.

Alone in my room, I felt the reality of the task ahead. Paraphrasing Nelson, the time comes when you must put your ship alongside the enemy. In this case, though, it was important not to regard Mulanje as an enemy. I felt deeply that I should respect the mountain, and begin in the right spirit. This sentiment is no stranger to climbers. I recalled a letter written by the usually ebullient Scott Fischer before he led an expedition on Everest in the disastrous 1996 season. “I have to be humble,” Fischer wrote, “because I don’t want to die in the mountains.” He perished on Everest that year.

At a modest 10,000ft, Mulanje is not an Everest, and therein lies the beguilement. A mountain has many killers; altitude is only one of them.

Despite these thoughts I felt elated as I set out next morning with Mckenzie and Michael. Four porters carrying kit and food for five days and four nights went in advance, planning to reach the Forester’s Hut at 6,000ft. I carried just a daypack and a stick.

The weather was bright, the trail gentle at first, later becoming rocky and steep, testing one’s hip and knee power. We moved through pine forests, past waterfalls and across rivers. Occasionally we passed men coming down, some carrying timber on their heads. In open areas we saw the high forested slopes.

In the late afternoon we reached the hut which had been the home of Fred France, his wife and baby daughter. Inside were pictures and memorabilia. A young Dutch couple had arrived earlier, and they dined with the guides and me by the fire.

In this Chambe area, when Laurens came, the scent of cedars was everywhere; now most of the cedars had gone, cut down for timber, firewood and charcoal. Pines have largely replaced them.

The following two days were alike: up at first light, 5.30am, departure just before 8am, and a full day’s tramp across spectacular terrain to the next hut, arriving before darkness and cold came at about 6pm.

It became clear that Mulanje is a massif, not just one mountain. Sixteen miles long and 13 wide, it is a spread of plains, ravines, ridges, rivers, forests and sheet-rock cliffs dominated by some 20 massive grey peaks. Hiking mostly below 9,000ft we encountered all this terrain, fortunately in good weather. In a hard rain, parts would have been a hazardous ordeal, and without a guide it would have been easy to get lost; sometimes the path vanished. And, of course, there was Mulanje’s intermittent shroud of mist. I thought of the Brazilian Gabriel Bushman who strayed and died there in 2009.

In addition to the dramatic scenery and sense of freedom it gave, one of the delights of those days was the company of the guides. They educated me through their knowledge of plants and wildflowers, and their discernment of birds, animals and landscape features I would never have noticed. The highlight was a leopard, almost invisible in the long grass.

The fourth day on Mulanje had an emotional charge, because we trudged into the great Ruo Gorge, where Fred France had died more than 60 years before. When we came to the spot, the riverbed was dry, the grasses tangled and glittering in the vivid morning light. France had attempted to cross when the river was raging and had been swept away. I touched the lip of the crevice where his rope had snapped. It was a sombre moment, the end of a pilgrimage.

We paid our respects, climbed out of the gorge and hiked east to Madzeka Hut, our last stop before coming off Mulanje the following day.

Reflecting on events now, it seems strange that JDF, knowing how France died, could write that dismissive comment about Laurens’s journey. I can only say his remark is of the kind made by a man who has never traversed the mountain.

I asked Chris Badger whether he had ever explored Mulanje in bad weather. “Only once,” he said. “And it was very frightening.”

William Atkinson’s trip was arranged by Wilderness Safaris (wilderness-safaris.com). British Airways (ba.com) flies twice daily from Heathrow to Johannesburg from £654 return, from where flights can be arranged to Chileka