by William Kamkwamba and Bryan Mealer, illustrated by Elizabeth Zunon ($16.99) [note: I change the cover to the kid’s version, they had the adult version] 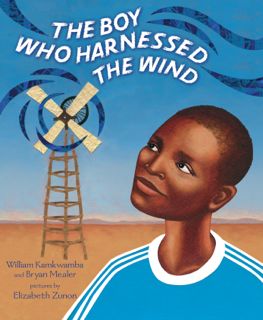 Farmers in Malawi, as in so many African countries, are desperate for water. Often, people hike for several hours to a common well, where they fill pots and bring them back home to dole out carefully, plant by plant. When a drought ravaged William Kamkwamba’s family farm, his father reduced their meals to one a day and told William, then 14, that he could no longer afford to send him to school.

William, unhappy about this, remembered pictures of a windmill in a library that Americans established near his village. He scavenged trash — a broken bicycle, a tractor fan, a shock absorber — and created a wobbly but working windmill. His prototype eventually led to a windmill and solar pumps that irrigated his mother’s garden and his father’s fields. This picture book simplifies the best-selling nonfiction book that the same authors published three years ago. Ages 6 and up.

Read more:Children’s Books: Scientists explore the gentle side of polar bears, and more – The Denver Posthttp://www.denverpost.com/search/ci_19778516#ixzz1kswEBZJK