Police arrests two for possesion of 48 bags of Chamba 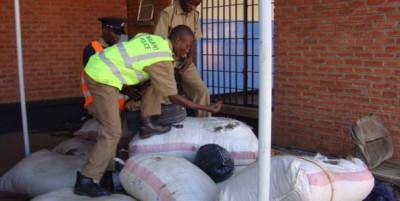 Police in Blantyre have arrested two men for being found in possesion of fourty eighty bags of indian hemp.

According to Assistant Superitendant Gondwa said the two Geofrey and Fred Shera were found with the drugs at Lirangwe Road Block and on their way from nkhamenya in Mzimba.

Supritendant Gondwa said police found the drugs in a truck under heeps of maize after conducting their routine checks and the two were arrested.

The two Geofrey shera aged 40 and Fred shera aged 31 both hail from Mwakasoka vilage Tradional Authority Mwakaboko in Karonga District and will answer charges of being found in possesion of illegal drugs.

Previous article
Nsanje hit with Cholera in a Time of Floods
Next article
MALAWI: Rising prices and looming maize shortages