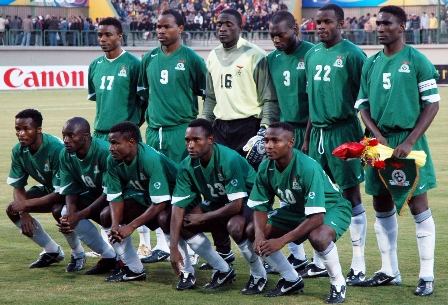 Zambia lifted the Africa Cup of Nations Sunday after beating the Ivory Coast 8-7 in a dramatic penalty shoot out in the final in Libreville.
Ivory Coast captain Didier Drogba missed a penalty in the second half of regulation play as the match ended scoreless after extra time.
Both teams were successful with their first seven penalties of the shoot out, including Drogba, until Manchester City’s Kolo Toure saw his effort saved by Zambia goalkeeper Kennedy Mweene.
But Rainford Kalaba missed the chance to clinch the game for Zambia when he shot over.
With the tension almost unbearable, Arsenal’s Gervinho blazed his penalty wide and this time Zambia’s Stoppila Sunzu made no mistake to give his side victory.
It is a fairytale triumph for Zambia, who were making an emotional return to the Gabon, 19 years after the plane crash which claimed the lives of their coach and 18 members of their squad.
The Copper Bullets were winning Africa’s top football prize for the first time after appearing in two previous finals.
But for Chelsea’s Drogba and his star-studded teammates it was a bitter disappointment after not conceding a goal in their six matches in the tournament.
Clear cut chances were few and far between in wet conditions but Ivorian goalkeeper Boubacar Barry had to make a brilliant early save to foil Nathan Sinkala.
Drogba set up Yaya Toure for his side’s best chance of the first half, but he fired wide.
Ivory Coast’s 72nd minute penalty came after Gervinho was pushed over, but Drogba’s effort never threatened the goal.
His Zambian counterpart Christopher Katongo hit the woodwork in extra time before the drama of penalties and victory for the underdogs.