ActionAid providing relief to thousands in flood-hit Mozambique and Malawi 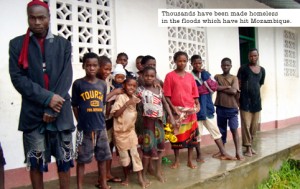 Fierce storms in southern Mozambique and Malawi have killed more than 40 people and forced more than 18,000 people to flee their homes.

In the Gaza and Maputo provinces of Mozambique and the neighbouring Nsanje District of Malawi, houses and bridges have been destroyed, health centres and markets have closed and schools have been converted into emergency housing for the displaced.

The floodwaters have yet to recede and in Malawi more than 50 cases of cholera have been reported.

The affected include children sponsored by ActionAid supporters worldwide.

ActionAid is liaising with the governments of Mozambique and Malawi to help ensure coordination in the organisation’s relief and recovery efforts.

The charity is providing food and essential supplies to meet the immediate needs of displaced people in both countries. It is focusing its efforts on women and children, who are typically among the hardest hit by disasters.

As the flood waters recede, ActionAid plans to provide seed supplies and agricultural tools to help people in affected areas rebuild their livelihoods.

“ActionAid is working alongside government and local partners to provide a safe environment for people in areas affected by the recent flooding,” said ActionAid Malawi Country Director Martha Khonje.

“We are providing food and other basic amenities to thousands of people who have had to leave their homes”.