Bishop officially opens Administration block at Our Lady of Wisdom 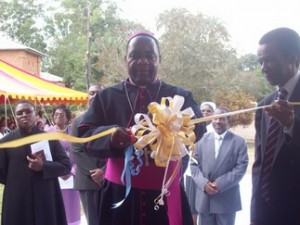 There were smiles on the faces of members of staff as well as students at Our Lady of Wisdom Secondary School during the official opening of the magnificent administration block on Friday July 24 knowing that the problem of staff, board and conference rooms as well as tea room will now be a thing of the past.

Conducting the official opening of the block was Auxiliary Bishop Montfort Sitima who in his speech acknowledged the staff as well as Parents and Teachers Association (PTA) for their efforts in raising the funds for the construction of the block.

He observed that the development is a milestone not only to the school but the Catholic Church at large.

“The block means alot to the school and the entire Catholic Church. The block that used to be the staff room was very small and there used to be problems when they wanted to have meetings but now we are happy that management and PTA managed to raise finances to built this magnificent building,” said Bishop Sitima.

On her part, Headmistress for the school Vitowe Dacruz expressed joy saying that the new administration block will help them perform a number of activities freely without being squeezed in the small room.

“The room we were using was designed to accomodate 12 teachers but as we were going along more teachers came in and the room became so small because we have over 20 teachers.

“We were also having problems when we wanted to conduct meetings because we were supposed to find a suiltable place but now we have this magnificent building which is so spacious and enough for all of our activities,” said the Headmistress.

she also thanked the PTA for their support in sourcing finances and vision of the construction which has come to reality.

Speaking on behalf of the students, Head girl Clara Mkukumila concurred with their headmistress that the administration block which comprises all the offices will help the teachers to know the behaviour of each and every student through conversation unlike in the past where teachers were operating in different places.

She also said that it used to be hard to find a class teacher when they were operating in separate offices for various assignments but now it will be easy to do so.
Atleast K17.8 million was pumped in for the construction of the building.