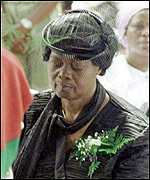 According to Woda organisers, Kadzamira among her achievements which impacted on lives of Malawians, included the formation of Chitukuko Cha Amai M’malawi (CCAM).

In her remarks, Kadzamira thanked Malawians for their support in both good and bad times.

“I have gone through thick and thin but I have always had support from people of Malawi,” she said.

Among several prizes, she has been awarded a ten day trip to Jerusalem where she is going to visit tourist attraction places every day and spend nights in very good hotels.

The awards saw several women being recognised for their contributions in various disciplines.

In sports, Mary Waya was recognised for her contributions to netball in the country while Gloria Banda emerged winner in the media category and Grace Chinga was the winner the arts category.