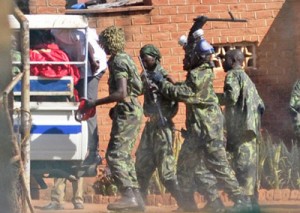 Malawi’s police warned on Thursday it would use force to break up any protests against President Bingu wa Mutharika as a rights group defied a ban on a meeting to discuss economic and political reforms.

“We warn that the Malawi Police Service will use all the force as is necessary to deal with such illegal demonstration,” Davie Chingwalu, national police spokesperson told AFP.

Chingwalu said the police had received information that the Public Affairs Committeee (PAC), which on Thursday will complete a two-day meeting, were gearing “to incite the public to conduct a demonstration”.

Riot police were deployed on the streets of Blantyre and Lilongwe on Wednesday as the group sidestepped a ban on a meeting at a hotel, opening it instead opened it at a Catholic cathedral hall in Limbe, outside Blantyre.

They were still outside the venue on Thursday and for the second day running scores surrounded the venue and searched all delegates, including bishops and leading opposition figures, as they entered.

But the government has no authority to regulate meetings inside the church itself.

Chingwalu said the rights group had distributed money to people, especially vendors, to join the demonstration.

“We ask members of the general public not to be tempted with money and join this illegal demonstration,” he said.

“We don’t want anybody to disturb the peace and security through illegal demonstrations,” Chingwalu added.

Solutions and plan of action

The protest would be illegal because PAC had not sought permission from authorities or informed the police whose role it is to give final approval, he said.

The government has accused the rights group of holding the meeting to call for the resignation of Mutharika, whom the group accuses of mismanaging the economy and trampling on democratic freedoms.

Anglican bishop James Tengatenga, chairing the meeting, told the delegates in his opening address on Wednesday that “things have fallen apart economically and politically”.

The meeting was aimed at finding solutions and plans of actions, he said.

There was no “intention to stage a coup on the current regime”, he said.

Mutharika’s second term in office has seen growing discontent with his rule with political tensions erupted into rioting in July, when police shot 19 people dead.