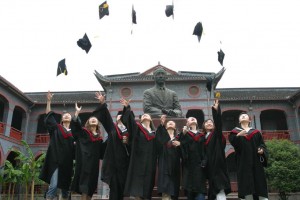 In the 1990s, Jeffrey S. Lehman, then the dean of the University of Michigan Law School, began visiting Beijing to help open a program for members of his faculty to teach at Peking University’s law school during the summer.

Given China’s rising influence, he thought it would be beneficial for his colleagues to learn about legal education in China at one of the country’s most prestigious institutions.

But Mr. Lehman, who is also a former president of Cornell University, did not expect to work for a Chinese university himself.

“I would have given long, long odds against that possibility,” he said.

In 2007, the leaders of Peking University, with whom he had developed strong relationships over the years, asked him to help establish a school teaching American law to Chinese students on their Shenzhen campus. That summer he became the chancellor and founding dean of the school, called the Peking University School of Transnational Law.

The number of foreigners working at the law school has increased since it was established, with Americans, Germans, British and South Korean academics. Of the nine permanent faculty, seven are foreigners.

The rise in foreign academics at the law school reflects a broader trend. As institutions in Western countries continue to suffer from budget cuts, academics looking for opportunities farther afield are finding that China is welcoming foreign professors with open arms.

Individual Chinese universities have been increasingly recruiting Western academics in recent years, but the Chinese government is also enticing foreigners with a new program that offers a range of incentives.

“We are going to see more foreign professors coming to China,” said Wang Huiyao, director general of the Center for China and Globalization in Beijing.

Late last year, the Chinese government started the Thousand Foreign Experts program, which is designed to attract up to 1,000 foreign academics and entrepreneurs over the next 10 years to help improve research and innovation.

It has already attracted more than 200 applicants from countries like the United States, Japan and Germany, according to a report in February by Xinhua, China’s official news agency.

The program is an extension of the Thousand Talent program, which started in 2008 as a way to attract experts, academics and entrepreneurs to China.

While 1,600 experts — more than half of them academics — came to China under that program, most were Chinese-born, said Mr. Wang, an adviser to the government on its talent policy.

Mr. Wang said the government wanted to further lift its intake of overseas experts, which led to the establishment of the latest program specifically aimed at foreigners.

He said the program was targeted at “people who have been recognized in the West, those who have a good track record.”

Mr. Wang said that while there were already many foreigners working in Chinese universities, particularly top-tier schools like Peking University and Tsinghua University, he expected the new government program would accelerate the number of foreigners joining other Chinese schools.

“They are sending a big signal to all universities in China that they actively support this,” Mr. Wang said.

With funding harder to come by in many Western countries, China’s impressive investment in research and development is proving a draw for many Western researchers. And with China itself becoming a rapidly growing field of research for scholars, academics like Marc Idelson are moving there to further their research.

A dramatic scene occurred when a pastor discovered his...
FaceofMalawiNEWS