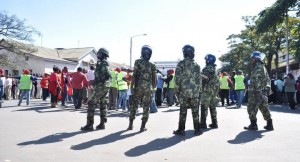 Malawi’s police stepped up street patrols on Friday after a leading rights group called for the resignation of President Bingu wa Mutharika whose government has vowed to act against “anarchy”.

“We have intensified police visibility and patrols,” police national spokesman Davie Chingwalu told AFP, who said police were on alert for protests.

The Public Affairs Committee, a group of religious leaders and activists, has threatened “civil disobedience” if Mutharika did not step down within 60 days or call for a referendum on his leadership within three months.

But Information Minister Patricia Kaliati warned that the government will not “stay idle while people drag this country into chaos and anarchy”.

“We have an elected government in this country. Inciting people to rise against government is against principles of democracy,” she reacted at a press conference late Thursday in Lilongwe.

The group issued the ultimatum after sidestepping a government ban by holding the two-day meeting at a Catholic church outside Blantyre where police searched delegates, including bishops and opposition leaders, as they entered.

“In the event that these demands are not met, we will call on Malawians from all walks of life to go for civil disobedience,” said the PAC in a resolution at the end of the meeting.

Several major donors cut their aid last year over concerns about the infringement of democratic freedoms, economic management and governance.