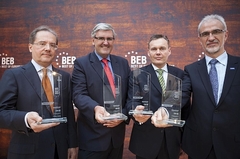 Winning companies reps with the BEB Awards Enlarge image Represetatives of the four winning companies with the BEB Awards. In the elegant courtyard of the Historical Museum in Berlin, international consulting firm Roland Berger Strategy Consultants held its seventh annual “Best of European Business” awards ceremony. The awards are decided by an international jury of reputed academics, and top brass of business, NGO and governmental organizations.

On hand for the event was Philip Rösler, German Economics Minister, and the leadership of Europe’s top business organizations.

This year the awards focussed on Africa. The choice was based on the continent’s incredible potential but also its still tarnished reputation. Dr. Martin C. Wittig, CEO of Roland Berger, noted that “the view of Africa as a monolithic block characterized by poverty, hunger, disease, war and corruption is long outdated. Africa is a huge growth market with enormous opportunities.”

Although Africa’s economic progress over the last decade is no longer a secret, many Western businesses and investors are still apprehensive about entering the continent. The winners demonstrate that enormous opportunities exist in Africa and they have seized them, taking on an optimistic perspective of the continent and becoming actively involved in African nations.

Burkhard Schwenker and Oscar Onyema Enlarge image Burkhard Schwenker, Chairman of Roland Berger with Oscar Onyema, CEO of the Nigerian Stock Exchange. In a speech at the BEB awards ceremony, Minister Rösler drew attention to the changes in Africa and the opportunities they represent for German companies: “German companies have much to offer the African market. Their top-quality products and services are highly valued there.”

Closer integration of market development and economic engagement is in the interests of both Africa and Germany, he said. “German business involvement in Africa means meeting international standards with regard to social and environmental issues and implementing them in accordance with the OECD Guidelines for Multinational Enterprises.”

The German government therefore supports firms in their involvement in Africa with a broad range of tools promoting foreign trade and development cooperation, he said.

The Winners and their work in Africa

BASF: The BASF Group has been active in Africa for 90 years. Today the company has more than 1,000 employees in Africa (excluding the oil and gas business) who are working closely together with local customers. Some examples of their work are in South Africa, where BASF has production facilities for emission catalysts, construction chemicals, coil coatings and polyurethane plastics. Innovative solutions are being launched in close collaboration with BASF’s customers. Also, BASF’s new corporate office in Nairobi opened at the end of 2011 and is the starting point for the company’s activities in East Africa and that Sub Sahara. The company’s target is to more than double sales in Africa by 2020.

Blick auf die farbig illuminierte Zentrale der Commerzbank in Frankfurt am Main während der Luminale. With six offices between Cairo and Johannesburg, plus various divisions in its head office in Frankfurt, Commerzbank supports more than 500 banks and other institutional clients in Africa, making it the number 1 among German-speaking banks for corporate business in Africa. Commerzbank has been active in Africa for 60 years now and maintains business ties to 50 of the 54 countries on the continent. The bank works mainly with governments, local banks and central banks. The bank also organizes seminars as a forum for transferring know-how to its business partners.

Linde AG: Linde has been working in Africa for many decades now and employs more than 4,000 people there. It has 17 offices in African countries and operates as an engineering service provider and a developer and operator of industrial plants. Linde provides its customers with individual training and guidance programs. Its engineering activities have expanded in Africa, with sales almost doubling in 2011 compared to the previous year.

Siemens Enlarge image (© picture-alliance/dpa) Siemens: Siemens is an expert in emerging markets. From its beginnings in South Africa, the company can look back at more than 150 years of successful business activities on the continent. At the heart of its strategy is building a local presence and a tight network in local markets. Siemens’ core competencies are energy, medical technology, industry and infrastructure solutions for cities and large urban areas. These directly address the challenges facing Africa with millions of Africans without electricity, with no access to clean drinking water and without access to modern healthcare. The Siemens Africa cluster today comprises more than 50 countries and sales have long since exceeded the one billion Euro mark.