The first female president in Malawi 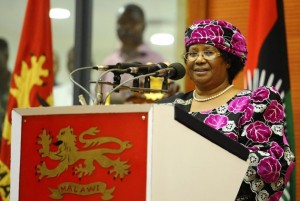 Joyce Banda, women’s rights activist and Malawi’s vice president, became the first female president Saturday when she was sworn in following the death of President Bingu wa Mutharika in the nation’s capital, Lilongwe.

Malawi was given the news of the president’s death several days after he died, according to the article. Banda had fallen out with Mutharika in 2010, which raised questions about her succession among some. After being expelled from her party, the Democratic Progressive Party, for refusing to support Mutharika’s decision to prepare his brother for succession, Banda formed her own party, the People’s Party, while she remained vice president, according to BBC News.

Banda has been a longtime women’s rights activist, organizing around women’s empowerment in Malawi. In January, she marked with Malawian women, calling for the end to street violence on women. She also founded the Young Women Leaders Network and the Joyce Banda Foundation, an organization that supports young girls, many of whom are HIV positive.