The announcement by the Malawi government that it will host the forthcoming African Union (AU) summit in June has come after President Madame Joyce Banda got an assurance from the African Union secretariat that it will provide financial support required for the impoverish Southern African country to host the meeting. 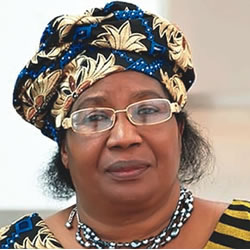 This blogger understands that during her meeting with civil society organizations on Monday, President Joyce Banda alluded to the fact that hosting of the summit will depend on the AU secretariat’s assurance to source money for Malawi to host the indaba which will cost more than one billion Kwacha.

According to the president, the country could not have hosted the 53 member countries’ indaba had it been that there were no assurances from Addis Ababa and other African leaders to provide financial support.

Madame Banda, then ceremonial vice president, vehemently opposed to hosting the AU summit amidst the economic crisis the country is going through.

However it is not known as to how much money the AU and other countries have pledged to provide to the country to host the summit which is only less than three months away.

So far a number of countries including South Africa, Zambia, and Tanzania have shown keen interest to assist the Malawi government in curbing the current fuel shortage before hosting the June summit.

Top on the agenda is the election of continental body’s Commission chairperson. During the last summit in January there was a deadlock as to who would become the AU commissioner between South Africa’s Home Affairs Minister Ms. Nkosazana Dlamin-Zuma and the incumbent Gabonese, Jean Ping. Both candidates (Zuma and Ping) failed to obtain the required two-thirds majority.

Mr. Ping, who was seeking re-election, was elected on February 1 2008 but officially took office two months later on April 28 2008.

Ms. Dlamin-Zuma is ex-wife to the South African President Jacob Zuma. So far, Pretoria has indicated of re-fielding Ms. Dlamin-Zuma at the upcoming Lilongwe summit. “Nothing stops us from fielding the same candidate because she has shown or proven to be a formidable candidate that the incumbent could not defeat,” South Africa’s International Relations Minister Maite Nkoane Mashabane said in a statement way back in January this year.

With the deadlock, Mr. Ping’s mandate was extended until the re-scheduled elections provide a clear winner.

Speculations are rife that South Africa is doing everything possible to garner member countries’ support for its candidate. Amongst others, analysts say, is manifested in recent gesture and support rendered by the Southern African giant, to the Malawi government towards the funeral logistics of Bingu wa Muthalika.

The South African government provided their military aircraft to ship back the remains of wa Muthalika who had been flown to Johannesburg when he suffered a severe heart attack. They have also offered to assist the struggling landlocked country with millions of liters of fuel during the funeral of the former chairman of the AU.

Information reaching this publication indicates the Malawi Airlines has...