Bingu wa Mutharika who is being put to rest on Monday, April 23 was Malawi’s third president after the late Hastings Kamuzu Banda and Bakili Muluzi. Hi died on Thursday, April 5, 2012 at the age of 78 afte suffering a cardiac arrest at the New State House in Lilongwe.

Mutharika was born Brightson Webster Ryson Thom on 24 February, 1934 at Kamoto Village in Thyolo district of what was then the British protectorate of Nyasaland. His parents were the late Ryson Thomu Mutharika and Mrs Eleni Thomu Mutharika. The young Bingu was educated at various mission schools in Thyolo and Mulanje districts before proceeding for his secondary education at Henry Henderson Institute in Blantyre and Dedza High School where he obtained a Cambridge Overseas School Certificate in 1956.

Mutharika was one of 32 Malawians that were selected to travel to India for tertiary education as the country prepared for independence from British colonial rule. Mutharika enrolled at the University of Delhi where he obtained a Bachelor’s Degree in Commerce and a Master’s Degree in Economics in 1961. On his return to Malawi in 1963, Mutharika was appointed as an Administrative Officer in the Ministry of Finance, based in the colonial capital of Zomba.

In 1964, Mutharika reportedly fell out with Banda and went into self-imposed exile in Zambia. There are however no records of what exactly contributed to this alleged fall out. Mutharika’s name does not appear anywhere in the discussions about the infamous cabinet crisis of 1964 where several senior Cabinet Ministers disagreed with then prime Minister Banda’s policies on the pace of Africanization in the civil service.

During a recent trip to Malawi in early 2012, a colleague at Chancellor College of the University of Malawi relayed a story that suggests that Mutharika’s decision to flee to Zambia was based on a complete misunderstanding. According to this source, Mutharika was supposed to travel to attend a conference in the United Kingdom. However, as telephones were such rarities at the time, the message informing Mutharika about the conference was relayed through the Zomba police station. As the police messengers did not find the late Mutharika home, they simply left a message asking him to contact Zomba police. As this took place around the same time of the cabinet crisis, Mutharika interpreted the summons to mean he was himself being targeted and opted to flee to Zambia.

While in Zambia, the former Webser Ryson Thomu changed his name to Bingu wa Mutharika in the spirit of the pan-Africanism of the 1960s. Mutharika’s curriculum vitae shows that he worked in the Zambian Civil Service where he reprized his old Malawi position as an Administrative Officer in the Ministry of Finance. He did not, however, stay long in the Zambia civil service as he moved to join the United Nations Commission for Africa in Addis Ababa, Ethiopia in 1966. Mutharika served at UNECA for the next nine years, rising to the position of Director for Trade and Development Finance. Between 1975 and 1978, Mutharika briefly left UNECA to take up a new position as the World Bank’s Loan officer for Kenya and Tanzania. In 1978, he returned to his old job at UNECA and remained there until 1990.

After an absence of nearly three decades, Mutharika returned to Malawi in 1991. He joined the likes of Bakili Muluzi, Brown Mpinganjira and others to found the United Democratic Front (UDF). In an early sign of the late Mutharika’s reliance on Muluzi’s patronage, he was appointed the first Secretary General of the Common Market for Eastern and Southern Africa (COMESA) when it was formed in 1994 .

However, a scathing report that highlighted Mutharika’s profligacy, poor leadership and gross mismanagement led to his ouster from COMESA in 1997. Mutharika blamed Muluzi for instigating his removal from COMESA and returned home a bitter man keen to even scores with his former patron. He went on to found the United Party, on whose ticket he contested in the presidential elections of 1999. Mutharika performed poorly and came last among five candidates, scoring only 0.47% of the vote. Broke and with very limited opportunities, Mutharika reconciled with Muluzi and dissolved his United Party. He survived on income from an old and dilapidated minibus which operated in the suburbs of Lilongwe with Mutharika as the driver/conductor.

After dissolving his UP and rejoining the UDF, Mutharika was appointed by Muluzi to serve as deputy governor of the Reserve Bank of Malawi. In 2003, Mutharika was brought into Muluzi’s cabinet as Minister of Economic Planning and Development.

Following Parliament’s rejection of the third-term proposal in July 2003, a bitter Muluzi went over long serving UDF leaders, who he suspected of sabotaging his quest to prolong his tenure, and handpicked Mutharika to stand as the UDF’s presidential candidate in the 2004 elections. In a campaign where Mutharika spoke very little, the loquacious Muluzi portrayed Mutharika as an ‘economic engineer’ who would devise solutions to Malawi’s development challenges. Mutharika won the elections with 36% of the vote.
At his inauguration on 24 May 2004, the new President Mutharika pledged to pursue an anti-poverty agenda with a focus on food security and fighting corruption. Mutharika’s anti-corruption agenda, meanwhile led to a quick fallout with his mentor, Bakili Muluzi, who was one of the targets of the anti-corruption drive. Muluzi and the UDF responded by making plans to impeach Mutharika. Mutharika reacted by resigning from the UDF on February 5, 2005 and went on to found the Democratic Progressive Party (DPP). Between 2005 and 2009, Mutharika and the DPP faced a very hostile Parliament that was dominated by the opposition Malawi Congress Party (MCP) and the UDF.

At the instigation of the opposition-dominated parliament, the Mutharika administration introduced a programme in 2005 that provided heavily subsidized fertilizer to Malawi’s subsistence farmers. This led to a major boost in the production of maize, Malawi’s staple food crop. The increased agricultural productivity led to impressive economic performance, with the economy growing by an average of 7.6% between 2005 and 2009.
On the back of this strong economic performance, Mutharika was reelected in May 2009 with 66% of the vote, the highest share of the vote of any presidential candidate since the transition from authoritarian rule in 1994. His DPP meanwhile won about 140 seats in the Malawi National Assembly, giving it more than two-thirds overall majority.

As Mutharika’s remains are put to rest at his Ndata Farm in Thyolo district on April 23rd, he leaves behind a mixed legacy and many unfulfilled dreams. The strong economic performance and the success of the agricultural subsidy programme gained him a lot of deserved local and international acclaim during his first term. His unfinished second term was on the other hand characterized by poor governance and economic collapse. He picked up fights with an array of individuals and groups, including donors, opposition parties, academics, civil society organizations and the private media.

In February 2011, he ordered the expulsion of the British High Commissioner to Malawi, Fergus Cochrane-Dyet. The British government, Malawi’s largest bilateral aid donor, retaliated by expelling the Malawi High Commissioner to the United Kingdom and suspending aid. In June 2011, the International Monetary Fund (IMF) declared its programme with Malawi ‘off-track’ after disagreements over fiscal and monetary policy. This resulted in the suspension of budgetary support to Malawi by most western donors. This has led to severe shortages of commodities ranging from fuel to sugar. Foreign currency shortages have forced many companies to close down or downscale.

While he preached fiscal responsibility, Mutharika traveled extensively with large entourages in an expensive jet. He constructed an inland port in Nsanje that became the definition of a white-elephant.
Although Mutharika maintained a strong anti-corruption rhetoric, this was constantly undermined by his own extravagance. This started with Mutharika’s decision in 2004 to move into the 300-room state house in Lilongwe. Most recently, Mutharika constructed an opulent palace at his Ndata farm in Thyolo, where he had also built the mausoleum where he will be put to rest next to his first wife, Ethel Mutharika, who died of cancer in 2007. Mutharika was further criticized following his decision to put his second wife, Callista, on a government payroll between 2010 and 2011.

The late Mutharika’s claim to be a true democrat was further sullied by his idolization of Malawi’s former ‘life president’ Hastings Banda and Zimbabwe’s Robert Mugabe. He surrounded himself with sycophants and was thus unable to appreciate how others thought of his leadership style. His egotism resulted in a failure to work with any of his two deputies, Cassim Chilumpha and Joyce Banda. Joyce Banda, who has since succeeded Mutharika as president, was expelled from the DPP in 2010 after refusing to accept the imposition of Mutharika’s brother, Peter, as the ruling party’s presidential candidate in the 2014 elections.

Mutharika was married to Ethel Zvauya Mutharika, who died of cancer on May 28, 2007. On May 1, 2010, Mutharika married his former Minister of Tourism, Callista Chapola Chimombo. He is survived by his second wife, Callista and four children from his first marriage. 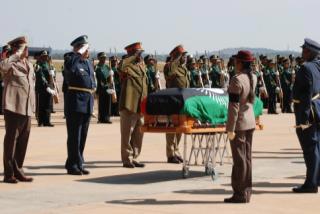 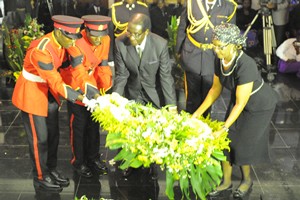 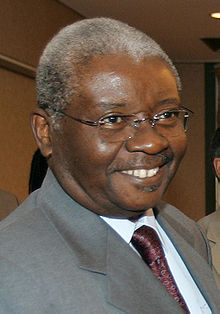