Although the Malawian constitution is clear about succession in the event of the death or incapacitation of the president, a cabal close to the late President Mutharika wanted to install their own man in power instead of Vice President Joyce Banda. Face Of Malawi explores the turmoil that followed President Bingu wa MutharikaŌĆÖs sudden death.

About a month ago, the world was awoken with the news of the death of the Malawian President, 78-year-old Professor Bingu wa Mutharika. He reportedly collapsed in his official residence on the 5 April and became unconscious after he suffered a cardiac arrest. He was thereafter rushed to the nearby Kamuzu Central Hospital in the countryŌĆÖs capital Lilongwe where he was confirmed dead. Medical sources within the hospital informed the media that the leader could not be treated or kept in a hospital in Lilongwe because the power and energy crisis was such that the hospital could neither carry a proper autopsy nor keep his body refrigerated. Mutharika was flown to South Africa where he was received dead on arrival.

In the chronology of events, one could easily identify three points of resonance and convergence between what happened (or did not happen) in Lilongwe and the drama that surrounded the unfortunate death of former Nigerian President Umaru YarŌĆÖAdua in 2010.

The first point is that when the president was rushed to the hospital in Lilongwe, the hospital allegedly had run out of adrenaline and epinephrine. These are essential drugs used for resuscitation of patients who suffer a cardiac arrest. These drugs are usually pumped into the heart muscles of the patient to monitor and confirm the flow of neuro-electronic impulses. It took about an hour to replenish supply of these essential drugs from another medical facility by which time the president allegedly had given up. If the number one citizen of a country could not get medical treatment, one will then wonder what will be the fate of more than 14 million Malawian citizens. According to United Nation Development Program (UNDP), more than 73 per cent of Malawians are poor, out of which one million live with HIV/AIDS, forcing average life expectancy to 52.7 years in 2010.

The second point is that, even though it is believed that President Mutharika died before he got to hospital in Lilongwe, his wife Callista, his brother Arthur-Peter Mutharika and close cabinet members withheld the information from the Malawian public. Instead, they hurriedly hired an air ambulance to carry the clinically confirmed corpse of the late president over to South Africa. It was alleged that the air ambulance was delayed for a few hours as the pilot realized that he had to airlift the ŌĆśsickŌĆÖ President as a cargo. He had to spend some time to obtain specific International Air Travellers Association (IATA) clearances necessary whenever a human body is being carried as a cargo internationally. As the cloud of uncertainty hung in the air about the death of the President, former Information Minister Patricia Kaliati ŌĆśinformedŌĆÖ the media on 6 April that she had just spoken to the president and that he was ŌĆśhale and heartyŌĆÖ. This was the same night that the ruling Democratic Progressive PartyŌĆÖs governing council were still contemplating on what to do.

The point relates to how an imminent constitutional crisis was averted. Though the Malawian Constitution clearly states that in the case the president dies or become incapacitated the vice president should automatically take over, the inner political caucus of the president thought otherwise. The Vice President of Malawi (now President), Mrs Joyce Banda, though willfully chosen as a running mate had fallen out of favour with Mr. Mutharika in 2010 and was expelled from the ruling party and she went ahead and became founder and leader of the Peoples Party. While President Mutharika was allegedly ŌĆśreceiving treatmentŌĆÖ in South Africa, his close associates were working relentlessly to stage a ŌĆścoupŌĆÖ that would subvert the constitution and pave way for the late presidentŌĆÖs brother and anointed successor, the Malawian foreign minister, to take over government.

After 48 hours of suspense, deception, intrigue and power play, a combination of intense domestic and international pressure paved way for the emergence of Mrs Joyce Hilda Banda as the fourth democratic President of Malawi and the second female President in Africa after LiberiaŌĆÖs Helen Johnson-Sirleaf. There were pockets of drunken jubilation among the locals who had repeatedly called for the late presidentŌĆÖs resignation in the past few months and had accused him of executive high handedness, mismanagement of the economy and trampling on democratic freedoms. It will be recalled that last July 19 civilian protesters were shot dead allegedly on the orders of the late President.

Questions are being asked as to whether President Mutharika died on the 5 or 7 April. Palpable confusion engulfed the scene, as the inscription on the coffin side at the official lying in state ceremony changed from 7 to 5. On the cross carried on the 23 April when the president was buried, there were bold black letters which stated that the president died on the 6 April.

Once upon a time in Abuja, then in Lilongwe, it seems that a deeper reflection on Presidential succession must come to African political radar screen. Why do African presidents choose their deputies only for geographical, ethnic or religious convenience and not competence? Why do they always disagree? Is it not time for the African political class to make room for many eventualities that could lead to the death of a sitting leader or better still create a room for a less acrimonious succession? Who says that ŌĆścabalŌĆÖ is a Nigerian word! 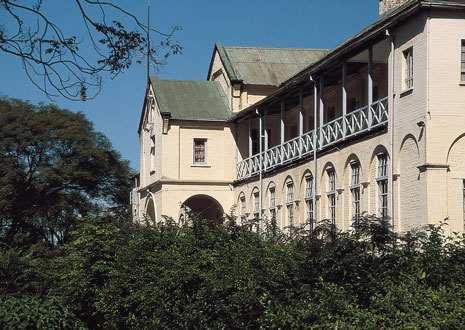