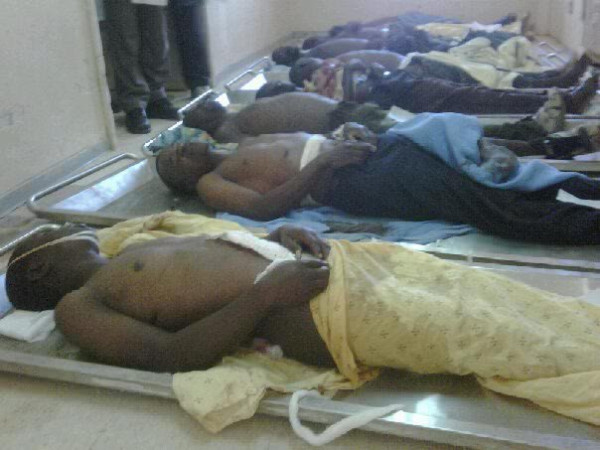 Malawi President Joyce Banda has described the way people died during the July 20 2011 demonstrations as cruel and has since warned that justice will take its course.

Addressing people at Mzuzu Stadium after laying wreaths on the graves of those buried at Zolozolo, Banda wondered how families and relatives of those who died feel.

She gave an example of a Lilongwe family whose child died when he was not part of the demonstrations.

“The parents sent the boy, Lovemore, to buy eggs at a PTC shop. They were surprised that he was not returning only to hear that there was a dead person somewhere who happened to be their son,” said a sad looking Banda.

She added that the commission of inquiry, which her predecessor established and whose results are now out, will reveal what really happened and that those responsible will be brought to book.

“People who know legal issues will look into the matter and see [whether] those responsible can be accountable. This is not vengeance,” she said.

A representative from the bereaved families, Aubrey Nkosi, said it was strange that while they were mourning their beloved ones, a ‘Caesar’ was dining and wining with vendors at Mzuzu Stadium.

Nkosi asked government to, among other things, construct a memorial pillar for the deceased and assist their families.

Speaking on behalf of the civil society, Council for Non-Governmental Organisation (Congoma) chairperson Voice Mhone said Malawians demonstrated because they were discontented with the former regime’s political and economic governance which was arrogant.

Mhone then called for the formation of a 20 July Tribunal. He also asked government to declare July 20 a public holiday.

He made the people laugh by saying that he knows the condition of the prison because he was once there.

Nyondo was arrested two years ago over a sermon he gave during the funeral of former legislator Professor Moses Chirambo.

The theme of the commemoration was ‘Time for Healing and Reconciliation’.

However, the clergy who preached at the ceremony warned that there could be no real healing unless the perpetrators come in the open to say sorry.