Trusting a fool to convey a message is as foolish as cutting off one’s feet or drinking poison! In the mouth of a fool, a proverb becomes as limp as a paralyzed leg. Honouring a fool is as foolish as tying a stone to a slingshot.

A proverb in a fool’s mouth is as dangerous as a thornbush brandished by a drunkard. An employer who hires a fool or a bystander is like an archer who shoots recklessly. As a dog returns to its vomit, so a fool repeats his folly. There is more hope for fools than for people who think they are wise.

The lazy person is full of excuses, saying, “I can’t go outside because there might be a lion on the road! Yes, I’m sure there’s a lion out there!” As a door turns back and forth on its hinges, so the lazy person turns over in bed. Proverbs 26:4- 14, New Living Translation of the Bible

“From here I will be in Lilongwe, isn’t that travelling? Am I using your fathers’ or mothers’ money? On Sunday and Monday I will be launching campaign in Mzimba central and southwest by-elections, on Saturday I will be Blantyre, so what? The government critics should be deeply ashamed – Vice President Khumbo Kachali in Karonga recently vowing that whether one likes it or not he and the president will continue travelling so long as it pleases them, remarks he retracted later as reported by The Daily Times

While I am president, I will continue to take women and the youths to international meetings. I have had rural women on my delegation sinc1997 and I will not stop, even when I am no longer president. President Joyce Banda vowing that as long as she is president she will continue to travel and take along guests such as women and youth on her international meetings despite being criticized for taking a delegation of over 33 people which has cost taxpayers a whopping K308 million.

Missing link in our education system

There are two kinds of knowledge. One is general, the other is specialized. General knowledge, no matter how great in quantity or variety it may be, is of but little use in the accumulation of money. The faculties of the great universities possess, in the aggregate, practically every form of general knowledge known to civilization. Most of the professors have but little or no money. They specialize in teaching knowledge, but they do not specialize on the organization, or the use of knowledge.

Knowledge will not attract money, unless it is organized, and intelligently directed, through practical plans of action, to the definite end of accumulation of money. Lack of understanding of this fact has been the source of confusion to millions of people who falsely believe that “knowledge is power.” It is nothing of the sort! Knowledge is only potential power. It becomes power only when, and if, it is organized into definite plans of action, and directed to a definite end.

This missing link in all systems of education known to civilization today, may be found in the failure of educational institutions to teach their students how to organise and use knowledge after they acquire it. Napoleon Hill (1937), Think and Grow Rich

Leaders are not born

Leaders are rarely born because they often do not carry any legacy, nor are they necessarily from great families. “People who have initiated and propagated great changes are seldom there because of a birthright. They emerged as and remained great leaders through their own merit; beginning with a decision to take on leadership and a determination to lead a cause they believed in.

Traditionally, leadership skills were thought to be something people are born with but as researchers correlated scores on IQ and personality tests, they found only a modest and moderate relationship that did not differentiate leaders from non-leaders in any way. Even behavioural correlations established the same. Researches show that leaders are non-distinguishable from other people in terms of their intelligence and other abilities.

Many of the world’s great leaders had been branded below average or just average individuals at some point in their lives, but later each one of them emerged as leaders because they made a decision to lead. Sangeeth Varghese, a leadership thinker and the founder of LeadCap

“Effective leaders are made, not born. They learn from trial and error, and from experience. When something fails, a true leader learns from the experience and puts it behind him. You don’t get reruns in life. Don’t worry about what happened in the past.

Successful leaders know how to define their mission, convey it to their subordinates and ensure they have the right tools and training needed to get the job done.

Leadership is all about people…and getting the most out of people. It is about conveying a sense of purpose in a selfless manner and creating conditions of trust while displaying moral and physical courage. Never show fear or anger. You have to have a sense of optimism- Collin Powell, author of an autobiography My American Journey

Do not offend the wrong person

There are many different kinds of people in the world, and you can never assume that everyone will react to your strategies in the same way. Deceive or outmaneuver some people and they will spend the rest of their lives seeking revenge. They are wolves in lambs’ clothing. Choose your victims and opponents carefully. Never offend or deceive the wrong person!

….If hurt or deceived, this man will show no anger on the surface; he will calculate and wait. Then, when he is in a position to turn the tables, he will exact a revenge marked by a cold-blooded shrewdness. Recognize this man by his

calculation and cunning in the different areas of his life. He is usually cold and unaffectionate. Be doubly careful of this snake, and if you have somehow injured him, either crush him completely or get him out of your sight. Robert Greene, 48 Laws of Power

The civil society in the run up to the bloody July 20 protests made several demands. Some of them were:

Government should reduce foreign trips by the President, Ministers and public officers;

The President should reduce the Cabinet to a reasonable size.

Did Mutharika trim his cabinet?

Has JB trimmed her cabinet?

I can go on and on asking the similar questions on the demands the civil society leaders and the masses made in July 2011 that lead to mass protests and the death of 20 protestors but space does not allow me.

The point I am driving home is that at times people are asked to choose between a corpse and a dead body.

I hope in 2014 during general elections, Malawians will not find themselves in a situation where they will be demanded to vote for either a corpse or a dead body.

Donor conning Undule Mwakasungura in affair with Australian Man, to stand for PP in Karonga 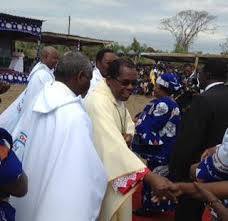