Kenya beat guest team Malawi 1-0 to secure a place in the semi-final of the Cecafa Senior Challenge Cup in Uganda.

Veteran striker Mike Baraza scored the only goal of the game 12 minutes after half-time.

The Harambee Stars will play Zanzibar in Thursday’s semi-finals of the east and central African regional event.

Hosts and defending champions Uganda take on Ethiopia in the last of the quarter-finals, the winners will face Tanzania in the last four.

Malawi’s preparations for the game were hit by a player strike on Monday.

The squad refused to train in a protest over unpaid allowances for the trip. 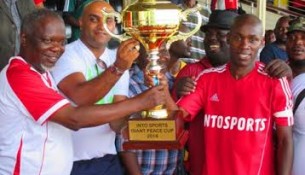 Africa Cup of Nations 2013 Final qualifying round: Results and fixtures