By: The Chief Mourner

It is quite appropriate and telling that the results of the Nation on Sunday survey that expose Joyce Banda’s political delusion have come on the back of yet another of her embarrassing fiascoes. On Saturday evening, in the south-western township of Bangwe in Blantyre city, the Malawi president was booed away and her presidential podium burned to ashes by crowds unimpressed by her maize distribution stunts.

As security officers frantically whisked the President away in her expensive presidential limousine, elsewhere in central Blantyre, The Nation newspaper was going to the presses to publish the result of a poll that would emphatically declare beyond reasonable doubt the accidental Malawi leader’s fall from grace. 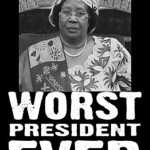 In typical fashion, instead of focusing on the issue at hand, the Malawi leader again evidenced her cluelessness by commenting on her earlier unconstitutional move of appointing her Vice-President, Khumbo Kachali as Minister responsible for the Malawi Electoral Commission (MEC). On this point, instead of listening to the voices of reason that checked the President for the appearance of impropriety in this appointment, Joyce Banda went on an electoral offensive, claiming that she did not need Kachali to help her rig elections at MEC because she did not foresee any worthy competitor in the forthcoming elections in 2014. Joyce Banda was oblivious of the fact that in making this statement, she was indirectly suggesting that if she had foreseen such a competitor, she would then have decidedly sent Kachali to MEC with the objective of rigging the elections.

That statement must now come into sharp focus when the results of the poll conducted by the Nation on Sunday are considered. The poll shows that not only does Joyce Banda have a competitor, but also that she is not even the current favourite to win in 2014. She is not even the second favourite, but rather, a miserable third. Does this now mean that she will have that desire to rig the election that she referred to in her boast on Saturday?

It is also important to note that a similar poll by Afro Barometer conducted several months ago placed Joyce Banda in poll position in terms of public opinion. This was long before the President thought it politically expedient to deplete maize stocks in the country’s strategic grain reserves and use it as a bargaining chip for winning the favour of the masses.

The incident in Bangwe was representative of the fact that Malawians are not at all impressed by the cheap and embarrassing idea of their president wandering around giving out maize for votes. This was further underlined by the results of the poll conducted by the Nation on Sunday, which put Peter Mutharika and Atupele Muluzi, politicians who have not given out a single bag of maize or flour to anyone, ahead of the deluded president Banda.

The reaction to the poll from the Banda camp is also as enlightening as it is typically African. The press officers at the State House did not sit down with the President to explain to her that the reason she has lost the survey even after giving out phones, SIM cards and air time to people to maximize her chances of winning is that she simply is unpopular. In stead, the State House press office decided to attack the newspaper that conducted and released the poll, claiming that it is a false poll and that the president is more popular now than ever before.

The Nation on Sunday took the time to explain the methodology of the poll. The newspaper justifiably suspected the criticism it would receive from the State House PR machinery. Typical of African political publicists, the State House did not disappoint. State House Press Officer Steven Nhlane predictably came out with his dueling sword and attempted feebly to cut the poll to shreds. It is standard practice in Africa for the ruling party to always be in denial when faced with bad news regarding the public opinion as to its mandate to govern. Not too long ago, the State House was all praises for the Afro Barometer survey although there never was any explanation regarding how that particular poll was conducted. The Afro Barometer Poll was genuine and worthy simply because it placed Joyce Banda ahead in its results.

The graciousness displayed by Peter Mutharika and the Statesmanship demonstrated by Atupele Muluzi in their reaction to this poll is a welcome foreshadowing of the future of Malawian politics and a stark contrast to the despicable backwardness exhibited by the State House. Clearly, in its backwardness, the State House fails to recognize that a poll of this nature presents an opportunity for a ruling party- or indeed any party for that matter- to take stock of where it stands with the public. The fact that the majority of Malawians do not approve of the Joyce Banda presidency will not be altered simply by vehement denial. As Atupele Muluzi has pointed out, a poll reflects the views of the public no matter what weight you attach to its credibility. A prudent and perceptive politician uses such polls to adjust her method and modify her practices to begin to listen to the voice of the people. President Joyce Banda on the other hand, has decided to throw the poll in the trashcan, declaring as it were, that the voice of the people is irrelevant to her presidency.

To the extent that Joyce Banda is not president by virtue of a popular vote, this is not surprising. It is simply illuminating to the Malawian public of the type of opportunism they are dealing with in their president. It does not matter that her maize distribution ploy is not working as planned in terms of buying votes. It does not matter that attempts to control the Electoral Commission are as unpopular as the devaluation of the Kwacha or the suspension of homosexuality laws. To President Joyce Banda, what matters is the blind belief enforced by her press officers and her hand-clappers that she faces no worthy competition when the elections come around in 2014. The denial displayed by the Statehouse to this important poll, and the comments made by the president regarding how she would send a rigger to MEC only if she believed she would lose in the 2014 elections should serve as yet another urgent warning to Malawians regarding the motives and schemes of President Joyce Banda.

Previous articleAunt Tiwo granted asylum in South Africa, says no regrets for being jailed for gay wedding
Next articleEducation programme in Malawi gives hope to refugees