President Joyce Banda is very consistent at inconsistency. And this eats away at her credibility as a person and as a leader.

She makes statements and acts differently from them. She expresses her stand on things, but implements them selectively. She will always act faster than logic and rationality permits on all matters that suit her.

Justifying the need to have the death of Polytechnic student Robert Chasowa investigated and the culprits for it brought to book as quickly as possible, President Joyce Banda chose to play the motherhood card:

“As a woman, as a mother I feel the pain of a fellow mother when I think about the death of the youngman. As a mother, her pain is my pain; this matter must be thoroughly investigated and justice must take its course.”

Well and good. The death of Robert Chasowa, mysteriously as it happened, needed an interrogation into it. And rightly so, all those found to have been involved brought to justice.

A commission of inquiry was thus set up speedily and an investigation, as per the presidential instructions, was finalised quickly.

A report of the commission’s findings was submitted to her. In a matter of the days that followed, suspects were apprehended and locked up before being released on bail.

Despite the arrests, the police said they needed to conduct further investigations into the matter. The investigations were carried out and a report was submitted to the Director of Public Prosecutions, Bruno Kalemba, a few weeks ago.

According to Kalemba, he wants to look at the report to determine whether to pursue the cases or drop them depending on the evidence, of lack of it, that he will find in the report.

As can be seen in this matter, the wheels are spinning to arrive at the ends of justice.

Incidentally, there is another matter where the wheels of justice are not spinning. If they are, it must be very very slowly. This is a matter where Misonzi Chanthunya is suspected to have killed a Malawi College of Accountancy student, Linda Gasa.

The remains of Gasa were retrieved from under the bathroom concrete slabs of a lakeshore cottage of Chanthunya.

This was after the two were in a middle of a misunderstanding over a pregnancy which Chanthunya wanted Gasa to expel and the latter wanted to keep.

Upon the discovery of the remains of Gasa, Chanthunya slipped out of the country.

That was the last that was heard of him. So far there have just been speculation about a never ending case in South Africa to get him extradited to Malawi. This has been going on for over a year now.

Linda Gasa too was born out of a woman. However what is interesting is that where it comes to her killing, President Banda does not feel the pain of her mother like in the Chasowa case.

The president must begin to answer questions. If she felt pain over the Chasowa case because she is a mother, why is she not feeling the pain over Gasa who was also a daughter of woman. Or it is that Gasa was born of a man.

Why is President Banda’s enthusiasm to know the truth and let the wheels of justice spin limited to the Robert Chasowa matter only.

The theory is therefore that President Joyce Banda is selective in feeling pain over deaths of children of her fellow mothers because in one case it is her nephew who is involved. She is selectively allowing the wheels of justice to spin on one case only because in the other case, a nephew has to be protected.

And there is reason to find merit in this theory going by the recorded conduct of the President where it comes to protecting relatives who are in trouble with the law.

Recently she pardoned a relation who was jailed at Zomba Central Prison again for murder and she has made sure the anomaly is not corrected despite the public outcry.

This is President Joyce and her idea of justice.

But when you have two cases of similar nature that need justice but you only pursue the ends of justice in one while ignoring the other it makes a mockery of why justice exists and must be pursued at all. 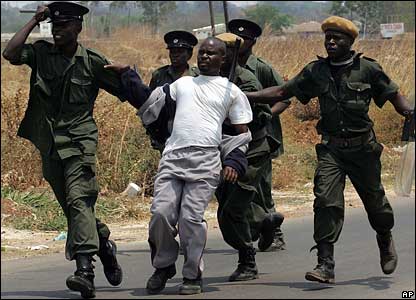 Zambian Man Arrested for Stealing Sister’s Son so he Could Sell Him at K7,000.00